Missing the Olympics? Need a dose of The Dolph? Well with the recent release of 1994’s Pentathlon, one hopes that it would satisfy those sport action thriller urges. Then again it might not, because even though this starts Lundgren the action is sparse and the story is downright dull.

In the early 1970s in Germany a young Eric Brognar is a pentathlete in training being coached by the Heinrich Mueller, who teaches them to all be winners and not losers. Fast forward several years and it’s the 1988 Olympics in Seoul. Eric excels at every event, but is beginning to feel depressed with his situation and coach. After making friends with the American team he decides to flee his trainers and make a new life in the US of A. 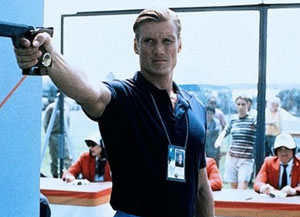 A couple of years pass and the Berlin Wall finally falls, while Eric has hit rock bottom, living in poverty and drinking himself stupid most nights. But his boss and AA sponsor John at the local café has other ideas (played by Roger E. Mosley) after discovering his past. John is determined to get him training again and looks to him to become a pentathlon champion once again. Mean while Mueller has arrived back on the scene, no longer an athletics coach he has become a Neo-Nazi terrorist leader, and unsurprisingly he is out for Eric’s blood.

In the 90’s people like Steven Seagal, Van Damme, Stallone and Schwarzenegger where ruling the cinemas with their action spectaculars. Dolph Lundgren on the other hand was jumping between the cinema screen and the TV screen. His reign was never as mighty as these other hard men, but it has proven to be a worthwhile step in his career. 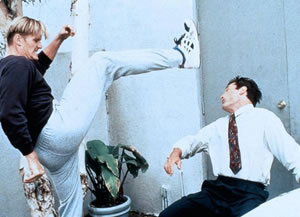 In the 90s Lundgren made some interesting and little seen action pieces, that while not perfect or as crowd pleasing, contained more like-ability and genuine personality. Even when reviewing films now one still gets excited over the prospect of a new Lundgren feature.

Now while all our old action heroes of yesteryear retire onto DTV features or become Internet memes, Lundgren has remained king of the DTV market. Films like Joshua Tree (aka Army Of One), Men Of War, The Last Patrol and (rather more recently) The Mechanik have become synonymous with fans of the genre as great Friday night entertainment.

While Pentathlon has dated (although made in 1994 it looks older then Rocky 4 which was made in 1985), it does contain enough moments of genuine personality to carry you through to the final explosive pay off. It is also hard to see why it carries an 18 certificate. The action is never as violent as it should be nor is it particularly high expletives, which makes for a misguided and baffling watch for those looking for an adult action feature. 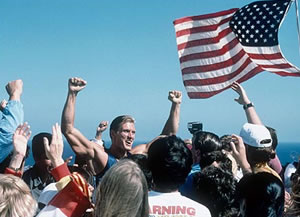 Being one of Lundgren’s lesser-known features (but one which I’m told has a devoted following around Europe) it cleverly shows Lundgren to be a normal (not superhuman) action hero. It’s just a shame the rest can’t be said for the no-personality support cast that pepper the rest of the feature. Worth a mention though is David Soul as the corrupt Mueller. Had he been a villain in another feature one thinks he might well have become cult action baddie, with his comical accent and hard facial features.

Also evident from the credits one can see that this was a project Dolph was clearly passionate about (Dolph helped produce this feature). A missed opportunity and a shame it never really adds up to anything substantial, or rather more importantly, anything with a dose of fun.

Barring the remastering on the image and upgrading it to a crisp Blu-Ray release, it still comes off as a lifeless image. Colours are bright and it is as sharp as any DTV film from the early 90’s is likely to be. On the extras front its an utter waste. The original video trailer (in standard def) is the only extra for fans. All in all this is only really a package for the die-hard fans of either Dolph or those suffering from Olympic withdraw.

File this under dressage; all bright colours and show, but little substance.