Those of you that are regulars to Attack From Planet B, will know that our ragtag team of reviewers love a good bad film. In particular we are unashamed fans of Lloyd Kaufman’s Troma films. Now you can imagine our surprise when those fine folks over at Arrow Video managed to get the change to distribute some Troma features (specifically three cult classics of the 80’s). The first of their Troma releases is the 80s bad film classic Class Of Nuke’em High (first full review here).

If you have yet to watch any Troma features (and may I ask why haven’t you?) then Nuke’em High is one of the best entry-level features to start off with. I mean what more could you ask for in an independent horror feature, then to have various moments that top scale of crazy.

How you view this film is dependent on what your tolerance is for sleazy jokes, goo and bad acting. If on the other had you thrive on all the aforementioned craziness, then you will feel right at home. Gorehounds are treated to some great moments of low-grade make-up effects, with most kinds of bodily fluids being thrown at the screen. The moment when our heroine Chrissy throws up an atomic baby/ monster is truly a revolting sight to behold (but then this wouldn’t be a Troma film without these moments). 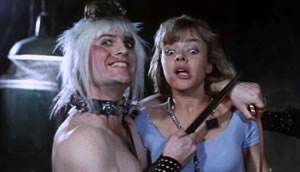 How could I forget to mention the colourful biker gang led by Spike, a crazed Tina Turner haired loon who overacts in the best possible way. And then there is Chrissy’s mutant vomit child that goes on a kill crazy rampage through the school basement. Never has there been a moment when a punch to the head been both ridiculous and funny (and might I add still an impressive effect on such a low budget).

Is it a good movie? Absolutely not, but it is a great Troma film and if you’re a fan of The Toxic Avenger or Sgt. Kabukiman NYPD and want a little more crazy for your buck, then Class Of Nuke’em High is for you. As schlocky as it may be it goes to show that you can’ t keep a bad Troma film down.

The Blu-ray release is something special for all fans of Troma. For starters the picture is the best it has ever looked, with enough film grain to not be distracting. Colour wise blues and reds are most prominent, showing off all the hideous 80s fashions in high definition detail. Barring the great re-mastering on such a low-budget picture the rest of the Blu-ray is chockfull of extra features (some from the original DVD release from Troma).

As is always standard with any Troma release, founder and president (not to mention co-director of this feature) Lloyd Kaufman provides an eccentric and in-depth audio commentary. Highly recommended for all those fans of Troma and cult films as he provides juicy tit-bits of crazed information. 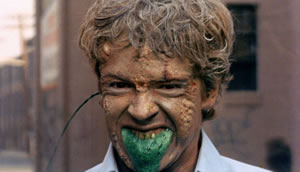 Next up is a detailed interview with Robert Prichard (gang leader Spike) and Jennifer Prichard (Miss Stein). While not as fun as the aforementioned commentary, it does provide and nice insight into the film, specifically for the fans. Making the Powerplant has matte artist Theo Pingarelli discuss how he achieved the effects for the powerplant sequence (a great little extra for all budding filmmakers).

One of the best extras has to be the recent Q&A with Lloyd Kaufman (filmed at the Prince Charles Cinema this year) as he goes into detail about Troma’s most recent film, Fathers Day. He also manages to involve the NYC film commissioner in on the discussion as he references his past work. Like the commentary, Kaufman comes off as an educated and informative listen that I am sure many a film fan will find riveting.

To top off the rest of the extras, fans are treated to a Troma Studio’s Tour (filled with good humor and bouncing Tromettes). Although a little dated it is still a great inclusion for the Troma completest. Troma Public Service Announcement is a nice inclusion that has Lemmy from Motorhead (present in a lot of the more recent Troma features) along with South Park creators Trey Parker and Matt Stone give out safety tips. Admittedly its juvenile but still worth a watch.

Finally there is an oddity of an extra with Aroma Du Troma, showcasing the very best of all the gore from over 40 years of Troma independence. There is collection of seven Deleted Scenes (in standard definition) that add little to the film (its quite obvious as to why they were cut), along with a Trailer Reel showcasing some of Troma’s greatest hits.

As is always the case with Arrow Video releases, the Blu-Ray/ DVD combo comes with a reversible cover. One side is the original VHS artwork (for all those lovers of classic video covers), while the reverse has some original artwork by the legendary British horror artist Graham Humphries (of the Evil Dead 2 and Frightfest posters). All in all this is a well put together package with a selection of old and new extras to satisfy all fans. Highly recommended and if you have yet to experience a Troma film, now is the time.