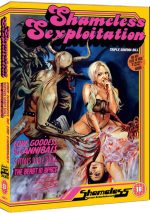 Thanks agein to Shameless Screen Entertainment, we have another competition on our hands and this time we’ve got the Shameless Sexploitation Boxset to give away.

Disc 1 – THE LOVE GODDESS OF THE CANNIBALS

When big business decides to build a nuclear reactor on ancestral Caribbean land, it’s up to Papaya, sex siren, Voodoo priestess and blood crazed Cannibal to seduce and kill those who threaten the ancient way of life of her People… Until she meets Sara (Sirpa Lane), a journalist hungry for a lead who’ll soon be sucked into a vortex of perverse, violent carnality and Sapphic lovemaking in this Eurocult classic from the wikedly dissolute mind of sleaze&sex-maestro Joe D’Amato.

Somewhere in a castle… a self-gratifying nun looks after delicious teen Baby-Doll and her wheel-chair bound brother and rounds off her duties with torrid sex with their mother, an insatiable nymphomaniac. This mundane debauched family atmosphere is shattered when Mum is murdered by her depraved, drug-addled, husband. Barely buried in the crypt, Mum’s evil spirit possesses teen who embarks on a frenzied rampage of incestuous sex and murder. In order to prevent the slaughter of all those who stand in the way of Satan’s Baby-Doll, the nun will commit the ultimate sacrilege…

Disc 3 – THE BEAST IN SPACE

“IN SPACE NO ONE CAN HEAR YOU COME!”

For more information and images of the Shameless Sexploitation Boxset click here.

So now that you know what is on offer, how do you go about winning it? Well it’s easy; all you have to do is enter the phrase that pays in the comments section at the bottom of the page and wait to see it you are one of the lucky winners selected after the closing date. But what is the phrase that pays? I hear you cry. Well here it is:

So enter and good luck and don’t forget you can also catch-up on all things Shameless and Cult-Labs!