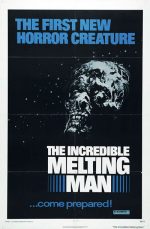 Upon regaining consciousness West finds himself hospitalised, learns that his flesh is slowly liquefying and becomes enraged. Hysterical, he chases a nurse (Bonnie Inch) through the hospital in a frenzied panic, ultimately killing her and devouring her flesh before escaping. Dr. Theodore Nelson (Burr DeBenning), a scientist and friend of Steven West, meets with Dr. Loring (Lisle Wilson) at the hospital to examine the nurse’s remains and upon discovering that the corpse is emitting radiation they come to the conclusion that West’s body has become radioactive. 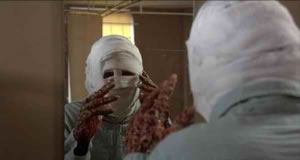 Nelson, now believing that West has become insane due to radiation poisoning, contacts General Michael Perry (Myron Healey), a United States Air Force officer familiar with West’s unfortunate accident, to inform him of his escape and to plan his immediate capture.

For me, director William Sachs’ homage to the 1950’s era of science fiction horror is a guilty pleasure. Originally intended as a parody of horror films American International Pictures decided during production that a straight horror film would be more financially successful, a decision that the director William claims hurt The Incredible Melting Man significantly. Despite this The Incredible Melting Man still contains a number of comedic elements that can sometimes defy belief. To quote William Sachs: “How can a serious horror movie end with the monster being shovelled into a garbage can?” 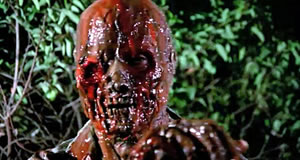 It is ultimately through the use of grotesque and gory makeup effects however that The Incredible Melting Man truly succeeds. Special makeup effects artist Rick Baker designed the monster’s gradual deterioration through the use of facial appliances and liquid substances that simulated melting flesh falling to the ground, creating the appearance that West’s body was falling apart. Even despite actor Alex Rebar’s reluctance to wear all the facial appliances Baker had designed, the effects are undeniably effective.

The Incredible Melting Man is an incredible experience. Imagine Val Guest’s The Quatermass Xperiment (1955) but exploited for 1970’s American drive-in audiences. Even despite the film’s lack of focus and a few obvious missed opportunities William Sachs’ grisly humour and Rick Baker’s gory and truly repulsive special effects will satisfy the hunger of those, like me, who love 1950’s science fiction cinema and 1970’s exploitation.