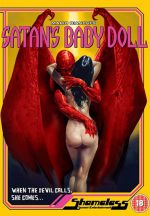 Directed under the name Alan W. Cools, Mario Bianchi’s remake of Andrea Bianchi’s Malabimba (1979) revolves around Miria (Jacqueline Dupré in her only film credit), a timid young girl grieving after the mysterious death of her mother Maria (Marina Hedman), and her dysfunctional farther Antonio’s (Aldo Sambrelli) drug-induced tyrannical rule of the household.

Her only comfort comes from the kindness displayed by the incredibly stunning Sol (Mariangela Giordano), a nun employed by the family to take care of Antonio’s paraplegic brother. Unfortunately for Miria her mother’s soul cannot rest until her death is avenged and thus the young girl is possessed by her seductive spirit. Using the mind and body of her daughter Maria seduces anyone that she has ever had sexual encounters with before finishing them off in a series of brutal and bizarre killings within the castle walls. 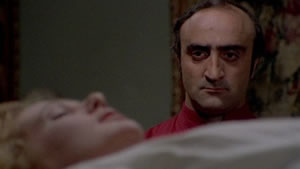 During LA BIMBA DI SATANA’s short 74 minute running time plenty of skin is on display as we learn of Maria’s rampant promiscuity. Indeed Mario Bianchi had originally shot this film as a hardcore feature which can be found under the title ORGASMO DI SATANA if you search hard enough (no pun intended).

LA BIMBA DI SATANA is a sexy and stylish gothic horror that despite it’s confusing plot is entertaining and atmospheric enough to warrant at least one viewing, even if it’s just for Mariangela Giordano!

If you liked this, why not go and enter our Shameless Sexploitation Competition with a chance to win Satan’s Baby Doll along with three other great Shameless titles.