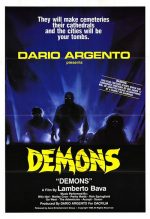 Demons is a film that is very much a product of the 1980’s, both in terms of its gory latex make-up effects and its brilliantly 1980s score (from Dario Argento regular Claudio Simmonetti). Like many Italian horror flicks from the 80s, this euro flavoured horror gem is a sentimental cult favourite of mine (along with Tenebrae,The Beyond and Contamination). So in honour of this cult gem finally being released, I have decided to do a personal little piece for you lovely readers on this Italian monster mash. So sit back, relax, grab a couple of cool cold beers, turn the lights out and read on. But make sure a Demon is not lurking somewhere dark, or even next to you. They have terrible eating habits. 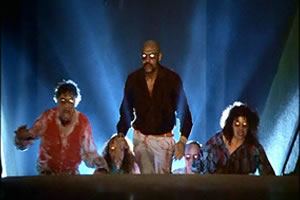 Directed by Lamberto Bava, son of the “Master of the Macabre” himself Mario Bava, Demons (or if you would rather Demoni) is a cult film beast that was destined for the late night cinema screenings. With it’s over the top gore and grue, bad dubbing and virtually non-existent plot. This is late night movie screening at its best. Annoyingly this film is made for cinemas (ironically since its based within one), which makes me pine a for the fact it is not shown nearly enough as a late night double bill along with Demons 2. But with the soon to be released Blu-Ray and DVD of both the Demons films, you can finally get hold of these wondrous creature features.

The story for, what little there is (but then with a film like this, does it really matter?) concerns a special preview screening of a new film at a newly opened cinema. After being supposedly chased down by mysteriously masked stranger (played by genre favourite Michele Soavi), our heroine Cheryl is presented a gleaming preview ticket to a secret film screening (would you say no to a free film screening?). When Cheryl and her friend Kathy decide to go to the screening things take a strangely horrifying turn for the worse as people start to die or turn into monstrous creatures, running amok in the auditorium. 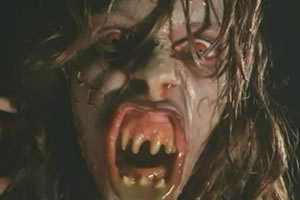 What follows is a dizzying blend of 80’s horror and action films; with the non-existent plot doing a runner soon after the first demon appears. Where you being bored by the endless demon hacking? Don’t worry a helicopter soon crashes through the roof. Filled to the brim with still fantastic looking make-up effects and an adrenaline fuelled motorbike chase through the cinema (with the hero brandishing a samurai sword no less).

Oh and did I mention that a demon erupts from the back of one woman before doing a runner? Well maybe its best to keep a few things a surprise, along with a twist which will make you scream several expletives

It really does assault the senses in terms of what is seen visually, that to this day still puts a giant grin on my fancy that all modern horrors seem unable to do, and still able to turn my stomach with its gut churning special effects. Who needs CGI when a film is this fowl and disgusting just with what a skilled make-up artist can do. 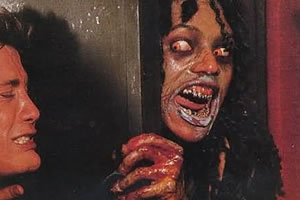 These gruesome and messy effects are down to the legendary Sergio Stivaletti, master of the latex effect having worked on such cult gems as Dellamorte Dellamore and The Wax Mask. All of this adds to what a good horror can do, by grabbing you and making you feel uneasy to the very pit of your stomach.

So sit down with a group of mates and marvel at its absolutely ludicrousness nature. You might well have a good time and how could that not be possible with the gloriously un-pc nature of the demons rampage such as: gouging a blind mans eyes out and strangling a couple mid foreplay.

This is the very definition of a horrific rollercoaster ride. If the pace doesn’t make you feel queasy, the effects will definitely induce a sense of queasiness among even the strongest of horror fiends. And any character named in the credits as ‘Tony The Pimp’, surely leaves you with little doubt that this is a must see. Just be careful when you turn out the lights, you might never know what is lurking in the shadows.