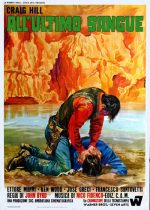 A story of three men, one a captain in the Northern American army out for justice, one a man sentenced to be hanged out for revenge and one man out for all the gold he can get; this is Bury Them Deep (All’ultimo sangue) a 1968 film from Paolo Moffa, staring Craig Hill, Ettore Manni and Giovanni Cianfriglia.

Craig Hill is Clive Norton a renegade captain in the American army, who has just come back from a successful mission in capturing three members of Billy the Gun’s gang, who are now set to hang. Billy the Gun (Giovanni Cianfriglia) is a ruthless bandit that has been running around the Mexican American border steeling all the gold and loot he can get his hands on, kill anyone in his way. His latest endeavour was the capture of a shipment of Army gold that was being delivered to a local bank.

Now with army gold in his possession, Billy the Gun is the number one target for the army superiors and they have assigned Norton the job of bringing him in. However, Norton needs one thing to help him bring in Billy and that is convicted murderer waiting to be hanged in the fort jail by the name of El Chalaco, as this man knows a few things about Billy that Norton needs.

El Chalaco (Ettore Manni) is first not interested in helping the authorities, especially Norton, as he his them man that put him away, but once he is told that it’s Billy the Gun that Norton is after, he changes his mind very quickly, as El Chalaco has a score to settle with Billy. So, the two set off to start their search to bring in Billy dead or alive.

With such themes taken from many other greater spaghetti westerns, such as For a Few Dollars more and The Good, the Bad and the Ugly, with double crossing and miss matched partners and even some set from these Leone classics are used, Bury Them Deep keeps a good pace going with a great revelation between Billy and El Chalaco leading to a excellent knife fight. Talking of fights and action, once the film gets going the story is filled with it, with some great stunt work, with bandits high falling from every building available and bar fights aplenty.

However, being the spaghetti western that it is and much like many others around at the time, scenes have been cut and pasted together from other movies giving the film an uneven feel at some points and with dramatic changes in scenery quite jarring too, from tree covered mountains to hot dry dust bowls. Also the story in its tone changes as much as the scenery, with moments of comedy to scenes of hard violence and melodrama. Though for me the most distracting part of the film was Nico Fidenco’s score, with its strange whimsical title score that just seemed out of place at many times during the film.

Overall for me this spaghetti western was a solid affair with excellent action, once it got going and a set of three characters that worked well, though Billy the Gun didn’t seem the most vicious of bandits in the spaghetti western world, but his reveal to El Chalaco and his constant double crossing added something extra to him. Well worth a watch.