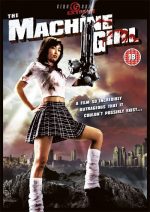 In the mood for a well made classy film? Of course not otherwise you wouldn’t be reading this particular writing on a film called The Machine Girl. This cheaply filmed piece of Japanorama has some fantastically over the top gore effects that manage to move past the point of being laughable, and head into channeling a more surreal sensibility. It is basically every thing Tarantino would like to make as a proper modern day exploitation film. Written and directed by Norboru Iguchi, it looks and feels very much like a modern exploitation film from the mid to late 70’s. It is first and foremost a quintessential revenge film, which uses the basic mold for a lot of best Japanese exploitation films (such as the Female Scorpion Prisoner trilogy, Lady Snowblood or the majority of Sonny Chiba’s violent back catalogue to name just a few). Plus its over the top violence and spraying glazers of blood (either on each other or over the camera) is a treat for fans of ludicrous gore flicks. Being present and correct in Machine Girl allows it to be one of the most outlandishly entertaining pieces of Japanese craziness I have personally seen since Ichi The Killer (another politically incorrect masterpiece of sadism mixed with gushing blood and ripe black humour). Basically it just means that you have to catch this violent piece of exploitation cinema as soon as humanly possible. 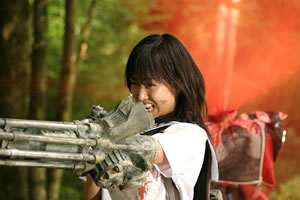 The basic plot concerns that of Ami and her little brother Yu, both of who are parentless due to their family being shamed over a murder inquiry leading to their parents committing suicide leaving them with just each other. The little brother gets involved with a son of a yakuza (which is not really fully explained) leading to him being bullied and eventually murdered along with his best mate Takashi. This leads to Ami loosing her rag some what and going on a mass murdering rampage against the teen gang and the yakuza family who are responsible for there deaths, which in the process leads to her having one of her arms lopped off. She escapes and joins forces reluctantly with Takashi’s hatred filled mother Miki, and together they hatch a plan for vengeance.

The film is just balls to the wall violence and of the most extreme variety that it at one point had me gag slightly, and that very rarely happens with any type of film for me, So that is a huge achievement if a film can do that to me after so many films and only allows me to become even more endeared to it, top marks there for the bar being raised so far it becomes giddy looking down at anything else.

It is obviously filmed on the cheap due to the make-up effects and CGI tinkering but the use of HD possibly DV cameras has allowed it to retain a certain low budget exploitation feeling throughout with its de-saturated grey look, allowing for when the blood flows to breath life more into this hyper kinetically strange film. There is hardly a moment where it feels as though the film lags or feels flabby, the pace is quick as is the wit and style and each performance is as off the wall and mental as the last actor. 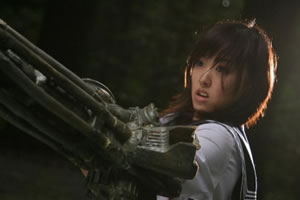 With all of the craziness happening within this little gem along with the high gore quota which allows it to verge on an almost comic book style film, I instantly found it supremely likeable and highly entertaining. Allowing it to be the type of film I could watch again and again and still find more to enjoy with its utter ludicrousness, I mean anything that contains such things as: Tempura arms, severed arms spraying more blood then humanly possible, severed finger sushi, a face full of nails as a form of torturing a villain, a bunch of crazy high school ninjas, body slicing throwing stars, a flying head removing guillotine, a chainsaw powered leg, a knife in the back of a head leading to the spewing of both blood and vomit along with a large intestine into a pan of boiling soup, a drill bra(yes that is correct), and last but not least a machine gun arm, just allow me to fall in love with it even more but I tell you what that was exhausting to mention and remember all of  the wacked out scenes of craziness and that is not even in full detail. But either way I highly recommend but for those with a strong stomach and more liberal mind.

So the pros and cons of this if you are as yet undecided range from a great pace but some glaring plot holes, so-so direction but an abundance of energy fun and downright tightly edited action sequences to make the most of the limited budget. The music is not as iconic as it could have been given the potential of a new kind of action heroine but that is a minor down point, as well as a bit of an off putting ending but again a minor loss of some fun marks that does not really ruin the film.

This just a rollicking good time (although admittedly not fun for the whole family due to, well the fact it’s a girl with a machine gun for an arm), but then it is in a league all of its own. It most certainly makes a great double bill with the just as mad, Vampire Girl vs. Frankenstein Girl or even Attack From Planet B’s personal favorite Big Tits Zombie. Fancy something different and oh so slightly unhinged? Then give The Machine Girl a good, its lock, loaded and ready to view for all cult film fans.

The family kami (god) of the killers is Hanzo Hattori. Hatori Hanzo was a famous ninja and is often referenced in various fiction and entertainment.