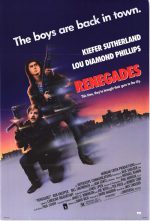 During the 80s and early 90s the buddy cop movie was as common as re-makes are today, but these movies had more invention and fun than many of these re-makes of today will ever have.

Many were made, but only a few were ever classed as classic, such as 48 hours, Tango & Cash and the all-conquering Lethal Weapon. Though during this time studios tried to mix up the formula to keep it fresh with different pairings, such as the cop / animal team-ups with such titles as K-9 and Turner & Hooch or even cop / alien with Alien Nation. However, the stalwart formula that was very popular with studios was the clash of cultures team up. Two people from different worlds and cultures teaming up to beat the bad guys, be it Street-wise cops from Detroit with the straight laced office from posh Beverly Hills or a wise-cracking smartass Chicago cop with a Soviet police officer. This is the category that the 1989 Canadian produced Renegades sits.

Set in Philadelphia, though prominently filmed in Toronto, as people wouldn’t believe such shenanigans would take place in the land of the Mounty and maple syrup; Buster McHenry (Kiefer Sutherland) is a cop who plays by his own rules, as they all do, and who is on an undercover mission of his own doing, though supported by his brow beaten superior, Finch (Bill Smitrovich) , to out dirty cops within his precinct and restore some pride to his family name; as his farther was sentenced for the same dirty deeds he is trying to stop. So there’s our first renegade, but as the title is plural who is the other? Well, Hank Storm (Lou Diamond Phillips), a Native American how has only just returned to the reservation and his family, but has now been entrusted with delivering an ancient tribal spear to an exhibition up in the city is our next. Now we have our two renegades, but how do we get these two “Young Guns” together and get the fireworks flying? 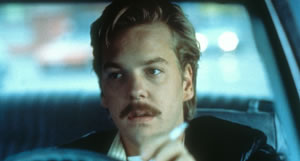 Buster has managed to work his way into the local crime syndicate, run by Marino (Robert Knepper), your typical Italian gangster cliché. Marino makes deals in restaurants with his bag-men over plates of veal parmigiana, raises horses out on his stud and wears a snappy suit to boot. Well saying that it seems the whole bad guy quota of this film is one big cliché, with the gangster’s moll (Jami Gertz), your typical brassy type who has been set up with her own beauty parlour to chat away the day with other molls, as they always are, henchmen with slick-backed pony tales and little clue of what they’re supposed to be doing plus the fact that the whole police force know who he is and nothing is done about it.

Anyway, Buster has set up a diamond heist for Marino so that he could flush-out the crooked cops who are to provide some sort code to get into the offices holding the diamonds. However, when it’s time for the heist the crooked cops doesn’t show or are not need by Marino for some reason and Buster is stuck on a heist with no pay-off. But things go from bad to worse as the heist goes bad and people start getting shot, one being the brother of Hank Storm as the gang try to make their escape through the Native American exhibition tha Hank is attending, and you were wondering how the buddy team was going to cross paths, weak I know but there you are. So as the gang escape through the exhibition the ancient tribal spear, which had been entrusted to Hank, is taken by Marino, not sure why, maybe it would look good as paperweight or something. So Hank takes chase after the gang, which still has Buster in toe, however the gang gets away only to leave Buster shot and injured for Hank to find. Now the team is together. 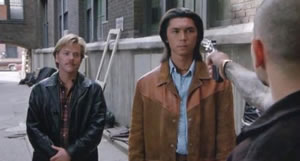 Hank takes Buster in to look after him so that he can lead him to the man that killed his brother, Marino and retreive the spear. Now the banter starts to begin with the usual culture clash remarks, Buster keeps calling Hank Chief, and dis-trust, with Hank not believing Buster is an undercover cop, as the two  start to work together to retrieve the spear and bring Hank’s brother’s killers to justice.

Though the idea of two people from different cultures trying to work out their difference for the greater good is as old as the day is long, the partnership between Sutherland and Phillips was always going to work to some extent due to their previous roles together. Why, the studio was even relying on their “Young Gun” roles to pull in the audiences, as can be seen by the movies poster. Though one way that this tries to differ from the other movies of this type is by bring in some Native American mysticism, though well intentioned it does come off a bit out of place, with one strange scene within a department store, where Hank seems to be in contact with the spirits while his father does some strange ritual in his bedroom, all very odd. 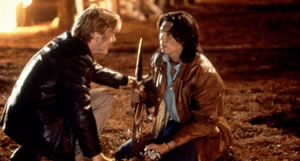 It’s not only Hank and his father that seem to have mystical powers, it also seems that the Philadelphia police force are possessed with clairvoyance as it seems that if there are more than 2 gunshots in the city, half the whole police force turn up in seconds, lights ablaze and sirens sounding. Though the biggest and most disturbing thing amongst all these mystical goings on is Sutherland’s moustache! It’s just friking wrong and you just can’t stop staring at it, it’s hypnotic.

Anyway back to the movie and all the diamond heist, native spear and crooked cops goings on, especially the crooked cops, which is really well handled and has some good twists and surprises, which all lead to the final show down against Marino at his stud.

With clichés aside and a quite straight forward plot, the pairing works well with good chemistry between Sutherland and Phillips and with some interesting ideas to try and make the genre different. Though Renegades never really raises it head above the average, with so many better examples about, it is hard to recommend it as something different and worthwhile to seek out. However, if you do come across it of an evening it’s worth a watch if nothing else for Sutherland’s tash. I’d say, more “dull guns” than “young guns”.