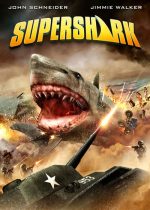 For the straight to dvd market, there is nothing like a shark flick to keep the dvd buying public out of the water and in front of their televisions. This month, Kim Newman brings us not one but two fishy offerings to mull over. First into the net is Supershark, a prehistoric monster that walks on its fines, can leap high enough to attack light aircraft and has bullet proof scales. But what’s more it goes head-to-head with a robot controlled walking tank, what more do you want? 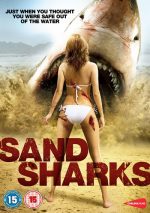 Next is Sand Sharks, where the beastie can swim under the beach and through the sand. Sand Sharks has the storyline of a promoter trying to put on some sort of Sandman Festival, with the obligatory bikini-babes as shark fodder. Kim says, both films could do with better shark effects and ought to have hired more than one competent ham. Though more of these shark themed offering will keep coming whatever.

As Kim puts it, exactly the same sort of tosh, can be found in his third offering, Robotropolis; where robots run rampage in a utopian, bot-friendly community of the future. It offers decent CGI robots, sleek gadgets but dodgy performances and some very hammy dialogue, “What are you standing around for? We’ve got robots to kill. Move!”

Finally we have Kim Newman’s Dungeon Breakout release. This month it is the sci-fi rom-com Timer, staring Emma Caulfield, her off of Buffy the Vampire Slayer and who should be a major star by now. The story is of a parallel present, where everybody has a wrist implant which count downs to the day that you meet you true love. However Caulfield’s character has a blank implant, which makes her quite upset, but those with dates set aren’t that much happier either. Kim puts this film as “more intelligent than many more expensive sci-fi films, this is a fresh, surprising geekazoid date movie.”

For the full Video Dungeon review get the March copy of Empire magazine.