Based upon the 1930 “Weird Tales” magazine short story “The Thought Monster” written by Amelia Reynolds Long, Arthur Crabtree‘s Fiend Without a Face (1958) could be dismissed as a fairly standard British B-grade science fiction thriller. However the screenplay, written by Herbert J. Leder, elevated the story due to it’s political overtones.

When a series of mysterious deaths occur within a small town in rural Manibtoba, Canada the townsfolk become convinced that nuclear fallout from radiation at a nearby American airbase is the cause. A series of postmortems reveal that each victim no longer has their brain or spinal cord. The cause is unknown and the only physical indication of this ‘theft’ are two small incisions located on the neck of each victim. 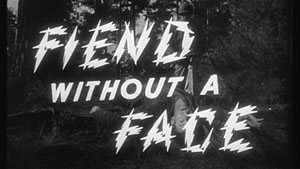 Professor Walgate (Kynaston Reeves), a British scientist located near the airbase, has been experimenting with telekinesis and through his knowledge of brain function, cybernetics and psychic phenomena has successfully “materialised thought”, creating a new, malevolent, invisible life form. Unfortunately, by syphoning atomic energy in his experiments the life form developed it’s own intelligence and tragically turned on him, escaping his laboratory. 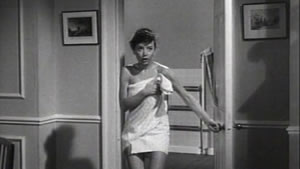 Could Professor Walgate’s creation of mind be the cause of this series of deaths, and if so how can you stop something that cannot be seen?

As the ‘fiend’ feeds upon each victim it multiplies in a ferocious number. The fear associated with atomic radiation is an underlying theme in Fiend Without a Face. Through the increased levels of radiation their hideous physical form begins to emerge. Born through thought the ‘fiends’ are revealed to be disembodied brains with spinal-cords and eye-stalks. 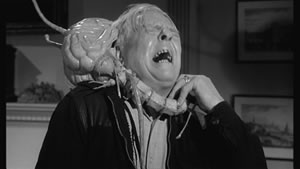 These creatures were created through the use of stop-motion animation by German effects artist K. L. Lupel and each effects sequence was directed by Baron Florenz Von Nordoff. This use of stop-motion animation, combined with the underlying political overtones, make Fiend Without a Face something of a rarity in 1950’s British cinema. A monster film with a great cast, a solid plot and excellent special effects which I highly recommend you track down.

“Fiend Without a Face” created a public uproar after its premiere at the Ritz Theater in Leicester Square. The British Board of Film Censors has already demanded a number of cuts before granting it the “X” certificate.