Back in the late 80’s and 90’s the action film was defined by the lone everyman against incredible odds, these odds usually being some terrorist group and or some other disaster or another. The list of films following this template is long, with some great highs and some woeful lows, but going through the list you do come across some surprises that sit up and want to be taken noticed of. One such film is Jean-Claude Van Damme’s Sudden Death.

Even back in the hay-day of the one man action film, with the likes of the heavy hitting trifecta of Willis, Stallone and Schwarzenegger, Van Damme was always seen as an also-ran in the world of ultimate action stars by many people; but is was this film that was seen as his best chance to challenge the big leaguers. 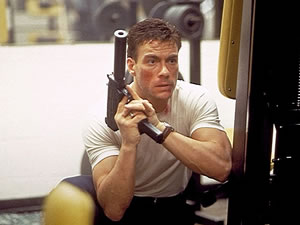 Van Damme plays Darren McCord, a fire marshal at the Pittsburgh Penguins Ice Hockey stadium and with any hero, he has a troubled past. The opening reel seeing McCord as a fire-fighter, who fails to rescue a young girl from a house fire who dies in his arms after being trapped in the ensuing blaze. It seems that the effects of this incident have ended McCord marriage and forced him to leave the fire service, only now returning back to work 2 years later.

Though still the caring father he takes his two kids to the seventh and final game of the Stanley Cup Finals, between the Pittsburgh Penguins and the Chicago Blackhawks, a big deal in the world of ice hockey, by all accounts. But it seems that the family McCord are not the only ones attending this grand sporting event, we also have the Vice President (Raymond J. Barry – Training Day and Dead Man Walking) on some sort of campaign trail thing. 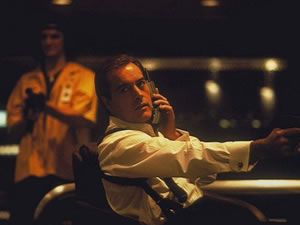 So we have the would-be hero, the venue, the family/emotional element and the bait, the Vice President. All we need now is the bad guys. These come in the form of a group of disgruntled CIA operatives led by Joshua Foss (Powers Boothe – Tombstone and Red Dawn). Is it me or were all bad guys back then called Joshua or something? Anyway, this group of terrorists are after billions of dollars from off-shore government controlled accounts and want the money by the end of the hockey game, or they will bring down the whole stadium by the means of 10 C4 bombs located around the arena. So now we have the plan.

With everything now in place the “Die Hard at a hockey match” template starts to take shape. After a number of incidences, namely McCord’s daughter wondering off, and not for the last time, McCord stumbles on to the terrorist’s plans and with outside help not an option it’s done to him to stop Joshua and his band of trained goons by finding the 10 C4 bombs. From then on it’s a race against time until the end of the game and all hell could break loose. 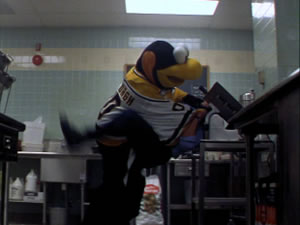 For what was, at the time, a throw away action movie, the characters throughout the film all have their moments and are brought to life with some good acting, especially from Boothe as the ruthless leader. Whose character has no qualms in killing people without reason and is always one step ahead of the authorities. Van Damme also puts in a good performance as the caring father put under extreme circumstances, though some of his parenting skills are somewhat questionable.

The Action is top notch, if not bombastic, with good fight scenes, especially against the six foot penguin (you have to see to understand), with Van Damme being quite restrained in his fighting exploits this time around. Though as a fire marshal I suppose you can’t be a high-kicking martial arts expert. Though his character uses his working knowledge to create a few homemade devices, such as fire extinguisher dart gun and some kitchen based explosives, all basic training for fire marshals I imagine. 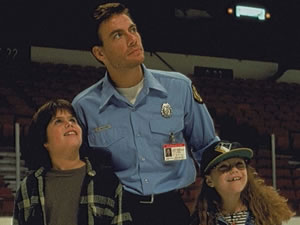 So the big question is, can this film stand toe-to-toe with the big daddies of action film? Well, not quite. Though very entertaining and with two good characters in Joshua and McCord, it just doesn’t seem to be the full package. All the supporting characters have little if no development and are a wasted opportunity and there is no explanation in how the terrorist managed to set up all their bombs and stop the authorities, these things were just glossed over.

However, there were a number of top, if not bonkers scenes, the main one being McCord taking to the ice as the Pittsburgh Penguins goal tender and making a match saving save before being sent off for fighting, god only knows how nobody noticed he wasn’t the team goalie.

Anyway for me, a good Van Damme film and good action film, not the best of both but still worth anybody’s time in my eyes. So hit the ice and face off for some Sudden Death action as soon as you can, you’ll be glad you did.

Jaromir Jagr wasn’t happy that the hockey player wearing his number (68) was on the ice for three of the opposing teams goals, making him a minus 3.