Severely sunburnt and unable to communicate after being stranded in a dinghy at sea, Rose (Brooke Adams) is discovered by a group of fishermen who quickly drag her onto their boat in an attempt to help her. Providing her with fresh drinking water to prevent further dehydration Rose begins to recount, in narrated flashback, how her island cruise with a group of holiday makers had turned into a Fulci-esque nightmare. 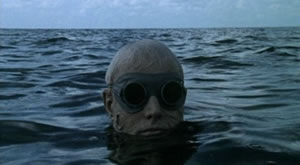 Problems first arise when the captain (John Carradine) and first mate Keith (Luke Halpin) discover that their ship’s compass has broken down leaving them lost at sea, a fact the captain tries to hide from his passengers. In an attempt to blindly navigate at night the ship collides with the rusted hulk of an apparent ‘ghost ship’, later found to be an old abandoned wreck. With the ship now plagued with mechanical problems, the hull severely damaged and the captain missing the remaining crew, and all passengers are forced upon the shores of a nearby island in order to seek help and refuge…

With very few options the group begin to search the island, soon discovering what is  initially thought to be an abandoned estate. However it is soon revealed that the island has served as voluntary exile to former SS Commander (Peter Cushing) who upon revealing himself orders the intruders to leave the island immediately. 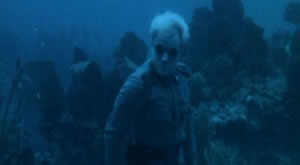 His advice however comes too late as the undead “Toten Korp” (aka “The Death Corp”) rise from the depths of the ocean to wreak havoc amongst the living!

SHOCK WAVES is highly underrated. Unlike the short-lived trend of underwater ‘Nazi-Zombie’ sleaze and excess in exploitation films like Jean Rollin’s ZOMBIE LAKE (1981) and Jesús Franco’s OASIS OF THE ZOMBIES (1981) Ken Wiederhorn has directed a horror film that surprisingly relies on more of a suggestive aesthetic, much like the work of producer Val Lewton and RKO Pictures, that becomes genuinely disturbing. Combine this with Richard Einhorn’s soundtrack and the bleak atmosphere provides a level of dreamlike ambiguity that makes SHOCK WAVES a highly recommended cult chiller.

There are actually eight actors playing eight different zombies in the film, although it appears that there are many more.