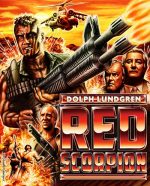 Made in a time before the caring sharing 90s arrived and when we still had the mysterious eastern block and the Soviets to play as our bad guys in our movies. Life was a lot simpler for our movie action heroes, however Red Scorpion went against the grain and had itself a Soviet Spetsnaz trained KGB agent as its hero. Though with any film directed by Joseph Zito (Missing in Action & Invasion USA) and written by Jack Abarmoff, a staunch Republican and founder of the International Freedom Foundation is as anti-communist as it comes, so you know that this hero wont be on the Soviets side for long.

Taught to stalk, trained to kill, programmed to destroy, Lt. Nikolai Rachenko (Dolph Lundgren – The Expendables 2 and Universal Soldier ) is a deadly, highly skilled agent for the Russian army whose brutal efficiency and single minded determination to serve the motherland leaves behind a trail of battered bodies and bloodied enemies. 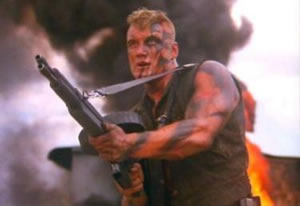 Nikolai’s newest mission is to track down the leader of a group of African anti-communist freedom fighters, Ango Sundata. So what will Nikolai’s plan be to complete his mission? First off he pretends to get drunk and machine guns the local officer’s mess, that’s how. And with a scene that has one of the best one liners in the film:

With such lines as this so early on, you know you’re in for a treat of 80s action even before anything gets blown up.

Now under arrest and locked up in the camp jail, Nikolai is joined by Kintash (Al White – Omega Syndrome ), Sundata’s lead military advisor and Dewey Ferguson (M. Emmet Walsh – Blade Runner and Missing in Action), a foul-mouthed  American journalist reporting on the troubles. 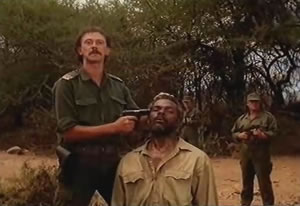 After a scuffle with a few guards and Krasnov (Brion James – Blade Runner  and Frogtown II ), second in command at the base, Nikolai helps Kintash and Ferguson escape and see’s a way to get to Sundata and complete his mission. The escape scene here is top draw stuff, with explosions galore and a truck escape that is reminiscent to that of the great truck escape in The Raiders of the Lost Ark, including motorcycle sidecars and exploding jeeps.

As the three make there way across the African landscape after successfully escaping, they start to bond and see the effects of the Soviet’s handy work on the people. Nikolai seems to start to doubt his communist overlords but honours his duty and attempts to kill Sundata  soon after arriving at the group’s camp. However, he fails in his mission and is sent back to his masters, as Sundata knows that Nikolai’s commanders will do  much worst things to him than he ever would. 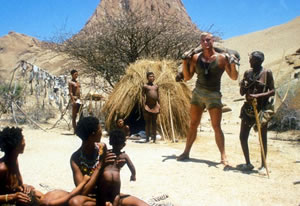 Now back in the hands of the Soviets, Nikolai promptly escapes again and runs into the desert, hiding from his master’s attack helicopters. Later found unconscious and stung to near death by scorpions, a tribal bushman takes him in. He his nursed back to health by the tribe and starts to learn and appreciate the ways of the bushman, and is final honoured by the tribe with name Red Scorpion.

During his time with the tribe, Nikolai sees even more handy work by his comrades and their use of chemical weapons on local villages. Nikolai now knows what he must do and returns to Sundata’s camp to help them over through the communist oppression. But before doing so the Soviets find Sundata’s camp and unleashes their full forces on the unprepared freedom fighters. With explosions that would make Michael Bay cry with joy, has Nikolai’s assistance come too late?

Red Scorpion is a great hidden gem in the plethora of 80s action films, and with it’s slightly over baked political messages, thanks to Abarmoff and Zito, you might dissmiss this as an anit-communist flag waving exercise. But if you look past all that out of date hoopler there’s a great little film here. With  good action, a wonderfull soundtrack, nice touches of comedy and a star who knows what he is doing when it comes action along with a great collection of supporting actors, you can’t go wrong with Red Scorpion. 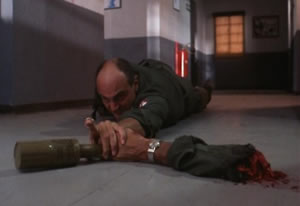 Arrow video’s presentation of Red Scorpion is as great as always with new artwork for the cover along with a reverse cover from the orignal release. Two great little documentaries and a wealth of information in a well presented booklet all come in this wonderful blu-ray release.

The blu-ray of the film itself is clear and sharp with only minimal graining in some darker moments and the audio is powerful and clear which make the explosions and gunfire even more enjoyable. Plus you get an introduction to film itself from the man, Dolph Lungren.

I’m just hoping that Arrow Video will be bring out more hidden gems from the action canon of the 80s soon.

The filmmakers used a real bushmen tribe and Regopstaan was their 95 years old leader who only agreed to play in the movie if his tribe can follow him everywhere.

Original Art by The Dude Designs