Adapted in 2010 from the manga Kyonyū Dragon by Rei Mikamoto, Takao Nakano’s Kyonyū doragon: Onsen zonbi vs sutorippaa 5 (released as Big Tits Zombie internationally and literally translated as The Big Tits Dragon: Hot Spring Zombie vs Stripper 5) is an intentionally over the top comedic Japanese fantasy-horror film that is a satirical nod to Japanese pop culture.

Featuring a cast of several known Japanese AV idol’s and filmed in anaglyph 3D, Big Tits Zombie follows Lena Jodo (Sola Aoi) who, after returning to Japan from Mexico, is in desperate need of cash and reluctantly accepts the job offer as a dancer for the Paradise Ikagawa Theatre where she would also receive shelter and live amongst her four new colleagues. 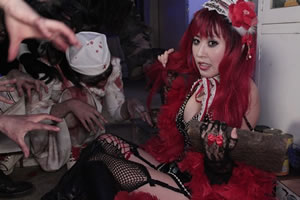 Unfortunately for Lena the Paradise Ikagawa Theatre is an extremely unsuccessful and unpopular strip club that brings in very minimal income due to the club’s inept promoter Manjiro, and possibly due to it’s rural location next door to an abandoned hot spring spa resort. Due to the insuccess of the spa resort the owner and his family committed suicide, or so the rumours would have you believe…

However Lena’s predicament soon changes upon the discovery of a hidden doorway in the girls dressing room which leads down to the basement of the adjacent hot spring spa resort. One room in particular is filled with an extensive collection of occult books and a rather mysterious sealed well. As Lena and the other girls begin to rummage though the ex-owners former belongings Gothic Lolita girl Maria excitedly squeals in joy as she picks up one leather-bound volume entitled ‘Book of the Dead’. Believing she can use the book to perform necromancy, Maria eagerly chants incantations from the book only to realise in an anti-climatic fashion that nothing has actually happened…that is until they discover that their next performance is overflowing with customers of the brain-eating variety! 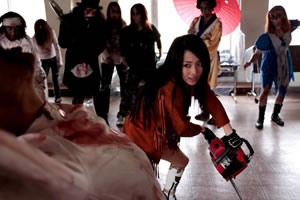 Big Tits Zombie has it’s tongue deliberately placed firmly in cheek. The special makeup effects and props are shoe-string, the computer generated imagery is deliberately amateurish, the costume design…revealing and the acting is way over the top. However combined with the comedic dialogue, the gratuitous gore and it’s sheer campiness Takao Nakano has created a extremely entertaining film despite it’s extremely low budget and although Big Tits Zombie is definitely aimed at a certain demographic, it just oozes with self satire, allowing this film to become more than just a curiosity. The title alone is worth the price of admission. Who isn’t Otaku with an interest for zombies and boobs?

Kenneth Patrick Wynne is a self-proclaimed animator, writer and ninja. After two hundred years of Fujiwara clan rule, whose lifestyle was the most extravagant of any shogunate, the farmers and common men decided to leave their homes and travel to the Togakure mountains where they established the ninja, a group of mystic shadow warriors. Four centuries later, the ninja had become the most feared warriors of their day, feared by even the powerful samurai. Their mastery of literature, animation and mind control ensured swift and complete victory over their enemies from the years of arduous training that forged mind and body into a death-dealing machine.