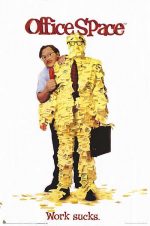 This time I wanted to cut away from the usual “hard to find” movies that I like to review for a cult classic: Office Space.

This is not your usual B movie but was surely not destined to the fame it gained over the recent years. It can be summarised in this quote: “Work Sucks”, I know it, you know it, basically we all do.

So what is so special about this movie? Well, if I tell you that the director, Mike Judge, made his debuts at Beavis and Butt-head Do America in 1996, so you have a good idea of the kind of jokes you will find in this hilarious movie, from the opening scene to the end credit it is just fun fun fun, a must have for anyone that has ever been a white collar or simply like to make fun of them and if you happen to work in or near an IT department then it should be on Santa’s list. 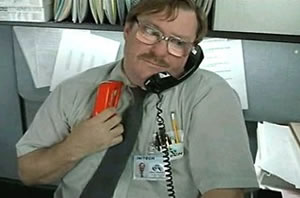 In a few words, when Peter Gibbons (Ron Livingston),a programmer at Initech, a software company where the boss could be called Dick, the co-workers are either slaves or back stabbers goes for hypnosis to relax and forget about responsabilities things go wrong (kind off) since he gets stuck in a “I don’t care about anything” state. Get it, watch it again and again, it never gets old and as Peterrs’s boss says: That would
be Greeeat.

After the movie became a cult item, Mike Judge was offered a chance to make a sequel called “Office Space 2: Still Renting”. But Judge said that he had been through enough anguish over the first one that he didn’t want to put himself through the experience again.