Walking up the cobbled stone street to The Prince Charles Cinema on a chilly Friday night in Leicester Square, there was a sense of both excitement and trepidation in the air. It felt like the right night to have monstrous film screening.

And by monstrous I mean The Monster Squad, for tonight there was to be an original 35mm screening of Fred Dekker’s little seen cult classic.  But the question was, will it be as fondly remembered as when it was seen by all those young enough to remember or had it become a dated piece of 80s kitsch? Well those that are curious the answer is yes, while it is full of plot holes; this is by far still an enjoyably silly romp that brings back fond memories of the VHS era. 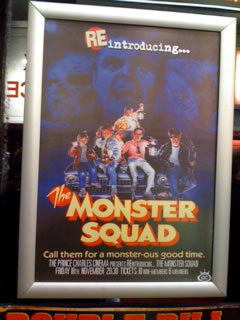 For those that are not familiar with this Goonies-like romp, allow me to enlighten you. Written by director Dekker and Shane (Lethal Weapon) Black, it concerns a group of 12 year olds who decide to form a club house team called, yes you guessed it The Monster Squad, when things start to go a little strange in town. All of this is attributed to a gentleman claiming to be a werewolf begging to be locked up.

What follows is one of the lost gems of 80s kiddie fright flicks. It contains a whole host of one-liners (which have that distinct 80s action movie feel to them) including; “Wolfman’s got nards!” and “MY NAME IS HORACE!”. It also contains some great make-up effects for its time, the werewolf transformation and Frankenstein’s Monster look being particular highlights.

As is always the case with these events screenings at The Prince Charles, the anticipation for the screening began to reach fever pitch early on, as the auditorium quick filled with cult film enthusiasts. The PCC have got into the swing of their events nights and Friday night was no exception.

Souvenir badges with the monster squad logo where available to buy before or after the screening. Its because of these nice little touches that the PCC adds to their screening events which make them all the more enjoyable for the cult film fan. 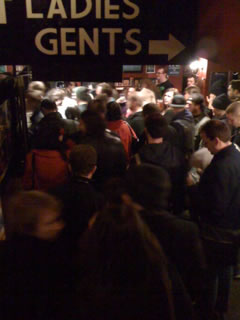 Before the screening started the audience was treated to a very heartfelt and interesting story about how The PCC managed to acquire the rights to this long lost print. It goes to show how dedicated this cinema is to providing its fans and customers with the best (or worst) the world of cult film has to offer.

Although it was a brief night the energy within the cinema was undeniably upbeat and excitable. It was a first for many who never got a chance to see The Monster Squad, on the big screen (either because of age or not being knowingly aware). There were cries of laughter at some of the corny dialogue and whooping howls of excitement at key moments such as; the exploding wolfman and the mummy’s unraveling. This is what a genuinely fun time at the cinema is all about and this is certainly a rare occurrence. Not since they screened Troll 2, have I had this much fun at a film screening. While seeing it in its original 35mm print added the welcome air of nostalgia, one that I wholly accepted for those brief 82 minutes.

While the icing on the care was the handout of handmade The Monster Squad, cards that were handed out as we leaved the screening. Yet again The Prince Charles Cinema has proved to be one of the most enjoyable cinemas in London and one that demands visiting whenever there is a special cult film screening event on.

I won’t mention the accidental slip of the next special event screening by the MC as that will ruin the surprise. But its safe to say it will be one I will be wholeheartedly looking forward to. Rarely has nostalgia been this good, thank you Prince Charles Cinema.