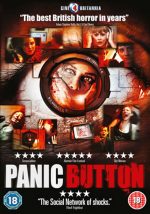 With Attack From Planet B back in the game as it were, we had to continue our review of the Great Kim Newman’s Video Dungeon, with all its wired and wonderful offerings from the darker side of the movie world.

The month of December brings us Welsh web horrors, Aussie sci-fi hokum and some Syfy channel wormy goodness. So let’s get started.

First inmate to plead its case for early release is welsh social-network thriller, Panic Button, where winners to an online facebook type competition are trapped on a luxury private jet. While trapped they are asked question which reveal their darker secrets and leading them to their final flaming destination.

From being trapped on a private to jet, to being cooped up in a remote cabin in the woods (aren’t they always)  Kim brings us Baghead. An interesting story of horror writers creating a script which start to happen around them, as Kim says not one for straight-up scares, but ne for raising the ethics of Blair Witch-style-torture-the-actors filmmaking. 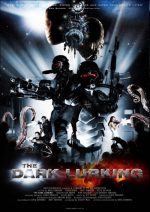 The next villain out of the dungeon is the Aussie sci-fi The Dark Lurking. A bask-to-the 80’s sci-fi nonsense ,with imitations of Alien and along for the ride zombies and evil space tentacles troubling a space station with mad scientists and jittery grunts shouting cheese dialogue.

Finally it would be rude not to let out Kim Newman’s Dungeon Breakout release, which is The Wild Hunt. A Canadian offering about role-play gone amuck. Not a film that takes cheap shots at it subject matter but highlights their sometimes pathetic, sometimes admirable enthusiasms, the story is of when one of the participants starts to take the whole role-playing a bit too seriously and every things start turn Lord of the Flies.

For the full Video Dungeon review get the December copy of Empire magazine.