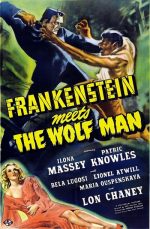 With two heavy weights in the world of Universal Picture’s Monster, Frankenstein Meets The Wolf Man should and could have been one of their biggest hits. But this film had more story behind the scenes than it did on offer to the cash paying public. So what was going on?

This was the fifth outing for Frankenstein for Universal, but it was the first in a line of “ensemble” monster films and as a sequel to the 1941 movie, The Wolf Man and The Ghost of Frankenstein from 1942. It seemed that Universal were starting to see their Monster movies as a golden goose that would just keep on laying, whatever the output would be. But they also saw this as a vehicle for their key new monster star, Lon Chaney Jr. who was going to play both the role of The Wolf Man and of Frankenstein. 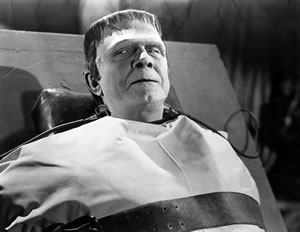 However, this idea was canned early on into production due to costs of actor doubles, vast make-up times and the need for the use of split-screens. So a new actor was needed to play the role of the monster, and the logical answer was to call on Bela Lugosi, Dracula himself. Lugosi was famously offered the original role of the monster for the original 1931 version, but declined, allegedly say that it was a role that “any half-wit extra could play”, leaving the role to a then unknown actor, Boris Karloff, who made the role his own and become a worldwide star.

Now in 1943 times and circumstances had changed for Lugosi and he needed the role for the cash. However, it was planned that this Frankenstein was to be more of a character study than just a stumbling, groaning hulk, this was also to change under the knife of the Universal editors and bosses and Lugosi seemed to suffer the most from it. 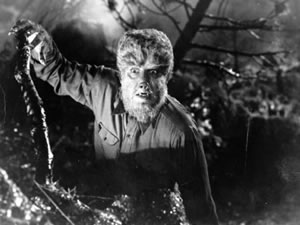 Lugosi then in his 60’s during film was visible struggled under the constant hours in the make-up chair and the demanding 16 hour days was not in good health at the time. During filming he collapsed due to the tough work schedule. Not only this, other cast members were also suffering with Chaney and co-star Maria Ouspenskaya were thrown from a horse drown cart leaving Maria with a broken ankle.

As mentioned, not only did Lugosi suffer with his health, his role was cut dramatically by the bosses, removing all his exposition between his character and Chany’s Wolf Man. Plus all of is dialogue was taken out from the film, leaving Lugosi’s Frankenstein as just a grunting shadow of his former self. 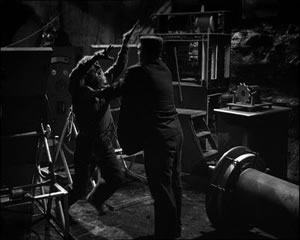 With all the goings on behind the scenes, what it movie actually like you ask, will in short very good. The film opens in a wonderfully realised graveyard with two grave robbers looking for money and jewels of the late Lawrence Talbot (the alter ego of the demised Wolf Man), never a good idea. Then leading the resurrected Talbot across Europe looking for a way to end his curse, and it seems the only person he could help him is the late Doctor Frankenstein.

With fantastic sets and great supporting cast stalwarts, such as Dwight Frye and Lionel Atwill, the Tyrolean atmosphere is breaming with charm that makes you feel right at home in the world of these two great monsters. The only thing I can call this movie out on, is what’s with the strange musical number half way through, where were the angry villagers with “flaming” torches? And give these two titans more screen time together.

So to round up things, the first of Universal’s “ensemble” monster film is a great success and enjoyable adventure monster romb and is great for any Sunday afternoon viewing.

The very first time we see the Frankenstein Monster, it is not Bela Lugosi in the makeup. Stuntman Eddie Parker also made appearances as the Monster – most noticeably during the final battle with the Wolfman.