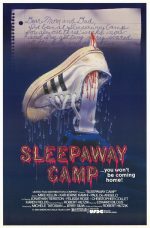 Sleepaway Camp is so weeeeeeird, for starters. It’s absolutely one of the strangest products of film from the early 1980’s, and not just in horror. At first, it looks like a Friday the 13th retread – which it is. But it’s so, so much more than that. I first saw this last year after endless word of mouth from horror peers and the like, and it actually surpassed the hype.

Camp in the title is spot on. Pre-teen Angela (Felissa Rose – Zombiegeddon) and her brother are sent by mom to a fun summer by a lake. Mom, first of all, is a Mommie Dearest rip-off, a sneering blanche-faced clown with a Stepford brain. It’s not exactly as funny as it is unsettling. Upon entering the camp, Angela meets the staff, including one over muscled bull, a cartoonishly scary pedophile cook, and a girl counselor with a penchant for the older, older man. On top of everything, some girl in her age group grew boobs over the summer, and Angela’s brother can’t stop staring! What’s a girl to do? 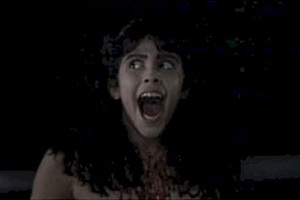 The summer progresses like a freakish circus. Random people are maimed, sort of, in weird, sort of memorable, sort of creative ways. Some guy falls in a vat of oil. There’s crazy shit left and right, and we’re led at one point to believe he’s the killer, and then she’s the killer, and then poor Angela, caught in the middle, barely uttering a word. She’s just trying to have a good summer.

But then – oh, yeah – Angela’s the killer. A reviewer only reveals this info when it’s of monumental importance. This twist is what gives Sleepaway Camp its word of mouth, what makes it legendary. Apparently, Angela caught her dad in bed with another man. Therefore, both Angela and her mother went crazy – Angela rarely spoke again, and mom started dressing Angela like a girl. That’s right, Angela’s a boy. This makes The Bad Seed look like Step-Mom. And I thought I’d seen it all.

Rent Sleepaway Camp for the sheer legend. And avoid the sequels as Angela grows up and tries to be an entertaining serial killer – but she sucks, she really does. It’s better when she doesn’t speak for the entire first movie.

When he’s not reviewing movies, Ross is writing about Halloween Costumes