Vilified and disregarded for years, cast into the dark, scuzzy vaults of Vipco, it seemed as though we’d never have a chance to see this classic mash up of Lone Wolf and Cub: Sword of Vengeance and Baby Cart at the River Styx given any sort of love or care.

Thankfully optimism paid off and we were rewarded with a glorious remastered HD version of this fountain of blood masterpiece. 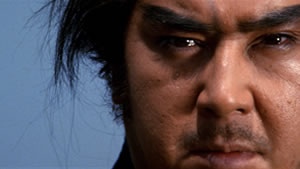 Ogami Ittō is one of the shogun’s top samurai, …betrayed and his wife murdered, leaving him no choice but to protect his son and exact revenge the only way he knows how – comprehensively, without mercy and aided by his son in a James Bondesque baby cart.

No sand dwelling, straw hat assassin stands a chance, as they do indeed, pay with rivers of blood…

We are thrilled to have DeeDee’s Vault of Vintage return along with Graham Murphy fresh from Record Store Day at Flashback Records who will be slicing and dicing his way through the tunage and as usual, the bar will remain open throughout the film and after. All for a measly £7.50.

The Rio Cinema is stupid easy to get to and from-

Review (By my old man) 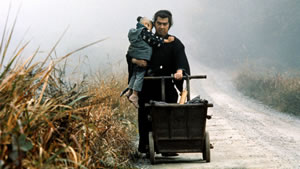 This film which is compiled from 2 separate stories from the Lone Wolf and Cub series (1972) and much simplified was released 1980 banned in the UK in 1983 for extreme violence and restored and re-released by Vipco in 2001 .

This 2001 version is dubbed in English whereas the originals are in Japanese . Personally I always prefer watching Chinese/Japanese films in the original dialogue and accepting the sub-titles because the voice-overs  , invariably done by American actors always sound like comic interpretations of the characters and give the film a comic slant , not required in a film of this type .

The films plot as mentioned is simplified and tells the story of Lone Wolf a masterless Samurai who lives peacefully with wife and son and who refuses to swear allegiance to Shogun Retsudo and his clan who then orders the death of Lone Wolfs’ wife. Vowing to avenge her death Lone Wolf and his young son, who throughout the film is transported around in a wooden baby cart fitted with blades that can be released from the wheels ( well worth watching this scene ), now set about the whole scale destruction of anyone related to or hired by the Shogun to kill him and his son. 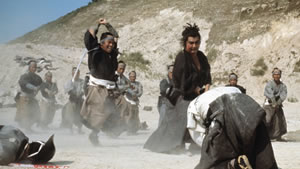 As the publicity for the film states ‘ its impossible to keep a body count ‘ ( although the young son does) . Gallons of pulsating blood is in evidence when heads and bodies are slashed by Lone Wolf in his quest to gain revenge . The film contains some splendid martial art swordplay throughout balanced by the developed relationship between father and son which is touchingly played . It has become a bit of a cult movie and one can see why but sorry still don’t like the dubbed version.