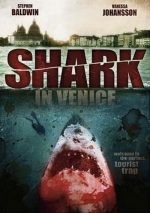 Shark in Venice on DVD, also known as Sharks in Venice when released at the silver screen in the USA… we obviously lost a few sharks in the process but no-one will see the difference anyway…

This could possibly be the worst movie of all time, “Venice” is shot in Bulgaria and for those that had a chance to see the real thing… well… it doesn’t look like Venice. The actors are bored, the shark(s) all coming from the Geographic channel’s stock video footage, with no regard to make them blend with the rest, light, darkness, who cares as long as you get to see a shark… 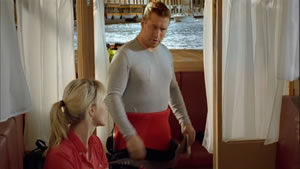 Now, let’s have a quick look at the story itself:

We are in Venice, where Doctor David Franks (Stephen Baldwin) and Fiancee Laura (Vanessa Johansson) are meeting with local police where David’s father went missing.  David decides to enter the canals in search for clues  when a large shark attacks. David is bitten in the shoulder but manages to escape to a cave.

There, David is playing at Indiana Jones and the Last Crusade, with traps and everything… (That’s where I started to loose the connection with the title to be honest). Anyway, he finally finds a large treasure, puts a brooch incrusted with gems in his pocket and returns to the boat. He then wakes in a hospital bed. And I can tell you that Mr Baldwin heals very very fast as 2 mn later he is able to jump and run like a goat. 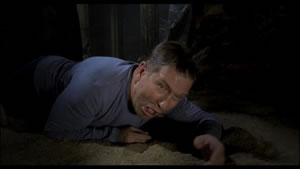 Anyway, David and Laura are asked for dinner with business-man Vito Clemenza (Bashar Rahal) (The bad guy by the way). Where he asks David to return to the cave in return for a large fortune. Then I don’t really know why, but sharks are attacking, eating a few people. Not that I am complaining but I cannot stop dreaming of those bad CGI… that is even scarier than the sharks themselves.

Then it goes mad, Laura is kidnapped by Clemenza’s  men, following are stunts, chases James Bond style… just before David and the local police run to her rescue.

During the movie we even hear that the bad guy himself introduced the sharks in those waters to keep divers away from the treasure and in the process stopping him as well… pathetic!!! 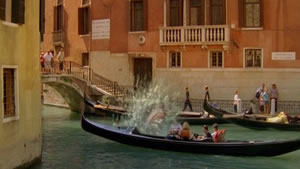 How bad is it you will ask? It is worst than anything I have seen but sometimes worse is better and, in a weird way, I enjoyed it.

It is made with this Plan 9 From Outer Space feeling that makes you feel kind of sorry for the team (for example the bottom of the sea made of brown pieces of fabrics clearly visible at 24:45 or hiding the side of the swimming pool at 1:10:06, the lack of acting knowledge (or boredom, I can’t decide really), the CGIs that look like the one I used to have on my Amstrad computer 20 years ago…everything in this movie is bad, really bad… but great at the same time.

This is one B movie that fans should not miss…

In all of the underwater footage of the divers, they miraculously are able to speak without difficulty while having the breathing apparatus in their mouths.