For a film that was made for less the $1 million, many my worry what can a monster film on this budget be like and can it live with the mega budget production line that is Hollywood? With its gorilla film making techniques, on-location shots and no actors, bar the main two leads; Monsters is anything but a mega budget effect film, but something so much better and deeper.

Set in the present, six years ago a NASA space probe crash-landed in north Mexico carrying alien samples from its mission.  These samples then grew and the Monsters were born and since then an infected zone was created. Walled off for the safety of the populous of the USA and Mexico, these monsters have been roaming the landscape ever since with the military doing their best to keep them at bay. 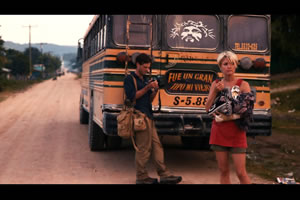 Amongst the monster attacks and the military assaults, a disgruntled photojournalist, Andrew (Scoot McNairy – In Search of a Midnight Kiss ),   is working to get the best pictures of these monsters and there affect on the people of Mexico. After one attack he is asked by his employer to check on the safety of the boss’s daughter, Samantha (Whitney Able – All the Boys Love Mandy Lane ), who had been travelling around the country.

Once found, Andrew is told that he has to make sure that Samantha gets back to the USA, by order of her father. Very reluctant to do so, he agrees and the pair start their journey north, with only the infected zone in their path to get to the American border.

Though Samantha is the boss’s daughter, she is not played in the standard spoilt brat role by Able. Her character is understated and with a softness that belies the emotion struggle that she carries with her through the film. The same can also be said for Andrew, a photojournalist that understands that he profits from the disasters around him but only sees it as a job. Saying that a photograph of a smiling child cost nothing whereas a child attacked by a monster cost $50,000. But Andrew’s character is never painted as hardnosed ruthless journo but just as someone doing what he does for a living. 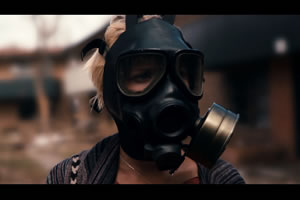 As the two make their way north, the journey becomes more and more difficult to complete, with trains being stopped and passports being stolen they only way for the pair to get home is take go over land through the infected zone. But the film isn’t really about the journey home but the journey the two take together.

Each has their own emotion baggage that the carry with them, Andrew has a son that he can never be the father to and Samantha has a fiancé that she is having second thoughts about. With Gareth Edwards turning this film into a character study of these two lost people. With their chemistry between them building throughout the film, the true indie feel of the movie comes through. With improvised dialogue and touching shots of the two as the visit a local festival, this is not to say that the film doesn’t have its tension and suspense.

With the use of sound and the notion of ‘they’re out there’, Monsters uses many a tick that has been used in such films as Jurassic Park and Jaws to give the presence and tension that this creature could bring. When the monsters are on screen, these large creatures are well created through CGI with a spearing hand. One attack within the forest, it is filled with all the key aspects for good monster attack should need, cars being lifted and tossed aside, mutilated bodies and gunfire. 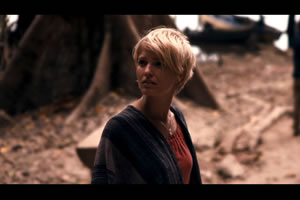 Though these types of scenes are few and far between, the film feels better for it. With not having to rely on such events to keep the film’s core story moving.

With a film of this budget there are over 200 special-effect shots, though many you will find hard to spot, with road signs and locations changed to fit the story all done in post production. Again showing what can be achieved on a minimal budgets and without over loading the viewer with bombast and spectacle.

Many will see this film expect wall to wall monsters, explosions and terror, and if so they will come away disappointed, but if you’re looking for a little bit more than you standard Hollywood production-line offering, Monsters has plenty to offer. A wonderfully shot, intimate piece of film-making, think Lost in Translation with monsters and you’re on the right track. With a beguiling soundtrack and wonderfully acted characters with great chemistry (not surprise as the pair were engaged at the time and are now married) and you have something that I think you will want to come back to again and again.

The release comes with a great making of documentary that really captures the enthusiasm and rawness of the film making process that Gareth Edwards brought to the production. It also shows you all you need to know about what can be achieved with minimal crew, equipment and cash.

The film was shot entirely on location: any settings featured in the film were real locations often used without permission asked in advance, and all the films extras were just people who happened to be there at the time.