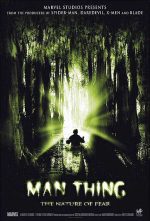 The Man Thing was a straight to video release, and from the first minutes you know why.

We are following the new sherif in town, and what a town, this must be the dumber town in the all US of A, the locals would make any dark corner of a family look instantly cool with an above the average intelligence… …but back to the sheriff, dead bodies, mutilated, are discovered and people are starting to blame the Man-Thing, a creature set to defend the swamp, an indian sacred site, which will keep on killing until everyone’s dead.

So here we are, not too bad of a scenario to start with, but this is where the movie falls short. 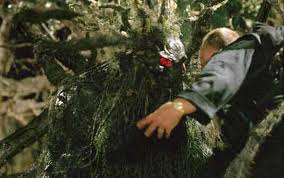 Nevermind the lack of well known faces, which sometimes can be a blessing, the story fails to give a human dimension to the creature. Basically I am lost at deciding who are the bad guys, the drilling company or the kill’em all creature? we still have a few naked chicks, great scenes where people are killed and great details of the result of the attacks.

The special effects are not that great either but I have seen worst, keeping the thing in the shadow as much as they can, using a few costume and CGI, it worked ok for me. the only thing is that green color used all around… too much sometimes, watch it and you will know what I mean.

Attention: spoiler below: The most disturbing scene in fact was the end really as the Man Thing that will never stop killing is stopped when set on fire… disapointing. So in a few words, I miss the fact that I watched this one on my own, it would have been great fun with a few friends enjoying a beer (please drink in moderation) and a gigantic pizza. It is a B-movie to share…

This was originally intended for a direct-to-video release, but later there was plans for a small release to theaters. However those plans were scrapped, and the movie’s fate became unknown, until it was later announced as a Sci Fi Channel original movie for Spring 2005. The DVD and VHS became available in Summer 2005.