The first film up then for April has to be in Kim’s view the worst film ever to be reviewed and he says, don’t take this for a recommendation. The Film is Absence of Light, a film with nonsensical plot involving secret societies, cloned monsters and political conspiracy is spun on a budget which entails no action and a lot of meaningless conversations. So, one worth dodging then. 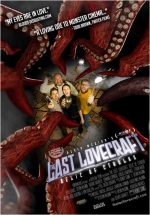 So from the worst film ever to be within the dungeon we seem not to have move much further up the ladder, The Last Lovecraft. A frat-boy road-trip comedy turn cosmic testicular horror, but without a lot of the humour that would be need to pull off such a combination. Though not without its merits, it does have a mildly cool animation section, explain then invasion of prehistoric Earth. It also does have a few creepy touches to keep the view entertained.

Next we have Aussie banshees in the film Dammed By Dawn, where such creature are persecuting an Irish family for their soles, with dead rising from the grave and other spirits, it seems the film is try to squeeze to much it its minimal budget and talent. 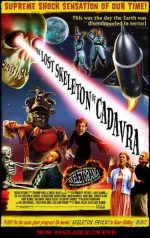 Finally we have Kim Newman’s Dungeon Breakout release. A dead-on dead pan take on the sub-Ed Wood strand of 1950’s science-fiction, The Lost Skeleton Of Cadavra. A black and white film with wry, dry and irrepressible charm, according to Kim. It offers leaden dialogue, redundant plotting, stiff performances and the least threatening monster ever seen on screen.

For the full Video Dungeon review get the April copy of Empire magazine.