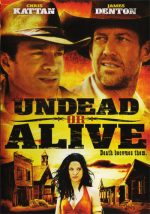 Well, that is exactly what happen in Undead or Alive, a Zombedy… the directorial debut from “South Park” alumnus Glasgow Philips.

Well, If I am saying Southpark, you know what to expect I guess.

The story couldn’t be better:

Elmer Winslow is a soldier on the run from the Union Army, and Luke Budd is a cowboy with a broken heart. When the two misfits rob the corrupt sheriff of an old west town, they have no idea that a plague of zombies is sweeping the country, or that Geronimo’s sexy niece may be their only hope of survival. 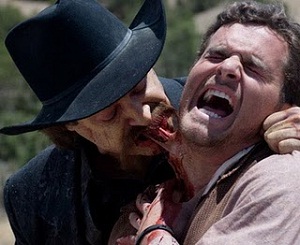 From the opening scene to the end credit, this is one B movie with the feel of a big production. The locations are absolutely magnificent (the film was shot in Santa Fe, New Mexico), the actors give it 100% (sometimes pushing it a bit too far, making it look like a big cartoon) and the zombies… well, they just do what they are supposed to do, they hunt the living, but with humor.

Strangely those living Dead are not the average no brain monster but are given a mind of their own. Intelligent Zombies? Yes they are and it only gives Undead or Alive another reason to be set apart from the common zombie flicks.

Loaded with zombies, great special effects, gore , head split, and bullets flying everywhere this is one that will surely not get an oscar but certainly has a place at Attack From Planet B…

And by the way, please note that the DVD contains the following Special Features:

– From South Park to the Wild, Wild West featurette

– Geronimonsters! The Zombies that Walked the West featurette

Susan goes bathing in a pond, and we see her tan lines; something you wouldn’t see on anyone in the old west. 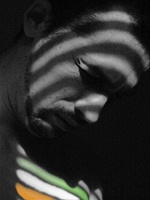 Skooal, or by his real name Damian A is 35 years old, 7 times dad living in Ireland, I am the admin of www.limited-release.com as well as an amateur photographer.

But the one thing that I am obsessed about are B-Movies. Often made with a budget close to zero, they reflect the true genius that make Films what they are supposed to be: Entertainment.