Brought to us by the director of The Hills Have Eyes and Switchblade Romance, Alexandre Aja, you know what you’re in for, to a point, with Piranha 3D; with lots of blood and carnage. Though here he takes the gratuitous to a new level and not just in the blood stakes. Aja has taken this film to the lowest low brow possible and it is all the better for it. If you’re looking for well rounded characterisation, intriguing plot development and well crafted story telling you’re in the wrong place. But saying that, it is one hell of a ride even if it’s short, daft and pointless.

So, what’s it all about then. Taking the tried and tested template of Jaws, and with a hefty wink to the great fish, Piranha starts with a great cameo of Richard Dreyfuss as fisherman out on the lake looking for his first bite of the day. When a earth tremor opens up a fault underneath the lake unleashing the sharp tooth beasties into the lake system. So before you can get through one rift of the Jaws theme, Dreyfuss’s character is fish food. 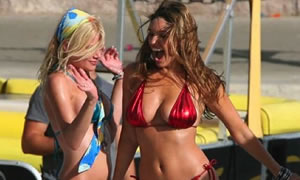 Before we get any more fishy goings on, we have a bit of scene setting. It’s spring-break at Lake Victoria and the local law enforcement, run by Sheriff Julie Forester (Elisabeth Shue –Cocktail and Hollow Man ) and her deputy, Fallon (Ving Rhames – Con Air and Dawn of the Dead (2004)) are busy dealing with beer drinking, semi-naked co-eds out on the lake. For 51 weeks of the year Lake Victoria is a quiet peaceful town, but this week the world descends on Lake Victoria and the town turns into flesh filled beer fest on water. 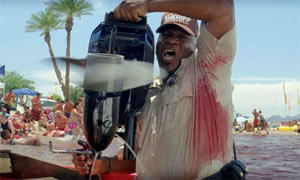 Some stand-out deaths to point out, are a cheese wire slice and dice of a couple of lovelies on a boat, a new way of hair removal and Derrick’s knob chopping demise, which even the fish find hard to swallow. 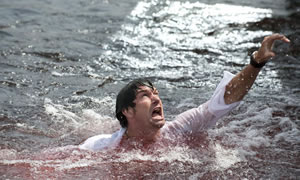 All the actors within the film do what they can with the material that is given to them, which is very little, but all seem to be having a great laugh in the process, which is all you need in a film such as this. With Jerry O’Connell hamming up the screen with his slimy director and Elisabeth Shue with here everyday-mum/hero sheriff giving a bit of depth to the very shallow supporting cast.

Though this film is a thin as Kelly Brooks Talent, it is so enjoyable to watch even with its short-falls which it does have are brushed aside with the shear exuberance that the film has in its own ridiculousness. I have to say I haven’t seen the film in its full 3D glory so I cannot comment on if it improves or hinders the experience of Kelly Brook swimming underwater, but I can say it can sit proudly next to Joe Dante’s original Piranha, which I think is no small feat.

The production crew estimated 75,000 gallons of fake blood were used each day.