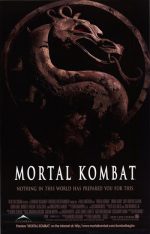 When you come to think of movies based on videogames, nothing very promising comes to mind. Such horrors as Super Mario Bros. , Ballistic: Ecks vs. Sever and Wing Commander litter the cinemas with their disgruntled audiences.   But every now and then there is the odd one that puts its head above the rest if only for a short while and provides a decent wedge of entertainment. One such film is Mortal Kombat.

Like any computer game, the story is as daft as anything and could be written on the back of a match box.

The Emperor of Outworld has his sights set on conquering the realm of Earth. But in order to do so, he has to win 10 straight Mortal Kombat tournaments. The Emperor’s sorcerer, Shang Tsung, has led Outworld’s forces to nine straight victories so far. The only thing standing between Earth and the Emperor’s evil forces are our three heroes. See not much of a plot, but these films are never about the story; it’s more about whether it represents the game faithfully, which is what the game/movie going public is after. 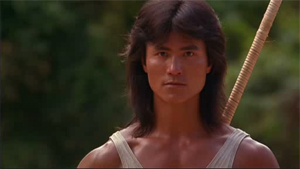 However, back to the story, as mentioned there is a tournament where fighters from Earth and Outworld must do battle, taking many of its ideas from Enter the Dragon. The film tries to fill the screen with all of the well-known character from the game, with our main heroes being Liu Kang (Robin Shou – Death Race and DOA: Dead or Alive ), Sonja Blade(Bridgette Wilson –  House on Haunted Hill and I Know What You Did Last Summer ) and Johnny Cage(Linden Ashby – Wyatt Earp and Resident Evil: Extinction ) all watched over by Lord Rayden(Christopher Lambert – Fortress and Gunmen).  Where on the side offside of Outworld we have Shang Tsung (Cary-Hiroyuki Tagawa – Tekken and Elektra ), Scorpion and Sub-zero, to name a few. 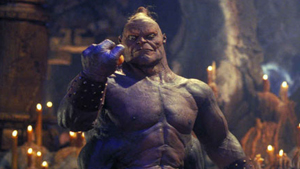 So then, after a bit of scene setting, which involves something about revenge, proving yourself and relying on others we get down to the whole point of the film, the fights. The fights on offer range from the really poor, Sonja v’s Kano to the rather good, Lui Kang v’s Reptile. To be far all the decent fight involve Lui Kang, as Shou is the only actor with any fighting chops about him. Though Johnny Cage’s fight with Scorpion, is good though stunt double J.J. Perry steps in for all the foot work. As the fight mount up and the bodies fall, it leads to a final show down between Liu Kang and Shang Tsung for the fate of Earth. 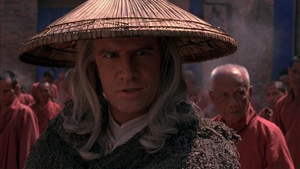 With all the fights and the references to it source material, is the movie any good? Well, more yes than no I have to say but only just. There is some great scene chewing by both Lambert and Tagawa, both try it make the most of the absurd characters. Another area that really adds to the film is the soundtrack, bringing a heavy techno/dance beat to the proceedings, with the energy level of  the movie lifted throughout, with tunes from the like of Utah Saints and Opus III.

Though I said this is good to a point, it does have its bad bits, and these bad bits are very bad. Wilson is painful to watch as Sonja, with poor acting and dyer fight scenes, and Ashby just comes off a bit weak throughout the movie. Though unlike many other films of its type, the one thing that pulls it above the rest, is its budget, which has been put to good use. With decent effect and and nice location shots, it just give the movie a little bit of gloss and sheen to make it above the norm.

So not a flawless victory, but by no means a fatality, Mortal Kombat is a good little Kung-fu movie for the console generation.

Jean-Claude Van Damme turned down the role of Johnny Cage to do Street Fighter (1994).