With the body of a local fisherman turning up dead, half eaten in the Louisiana bayou. Medical examiner, Sam Rivers (Tory Kittles– Sons of Anarchy and Get Rich or Die Tryin’), what a name for such a film, is called in to investigate. He teams up with the local officer, Mary Callahan (China Chow– Head Over Heels) and the pair head off out into the bayou to find what killed this man.

Both agree that the fisherman didn’t die at the hands of an alligator or a wandering shark, so pick up local fisherman, Elmer (Muse Watson – From Dusk Till Dawn 2: Texas Blood Money and I Know What You Did Last Summer) as guide to help them around the bayou. Though both are locals and should now where they are going anyway.

Elmer is told about the dead local and takes the two of them to a nearby community out in the swap. A collection of three house boats await them, each with their own unique set of colourful inhabitants. The hippies, one played excellently by Richard Edson (Platoon and Strange Days) as Roland, the survivalist and the local voodoo witch, Gloria (Donna Biscoe – One Missed Call and Mississippi Damned) . Also visiting this little floating Venice in the middle of the swap is the voodoo witch’s daughter, Eliza (K.D. Aubert – Friday After Next and Soul Plane ), and her lawyer boyfriend, Dan.

So, with the buffet all lined up and ready, the story starts to step up a pace. Gloria informs Sam that this isn’t the first strange incident in the swamp and that fish have been disappearing throughout the bayou. It all started after a heavy hurricane hit about a month or so ago. The pair are also told of a wreaked boat that has been washed up nearby. 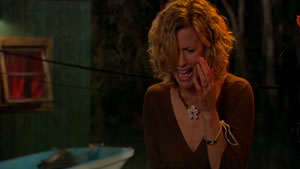 On investigation of the wreaked boat they find all the crew gone or dead. However, this was no ordinary boat and was the property of some shady characters involved in the animal import/export business, especially DNA enhanced animals. It seems some ultimate animal hunter, one that goes by the name Jeff (Tomas Arana – Gladiator and The Bourne Supremacy), is after the ultimate kill, and his latest quarry has escaped into the bayou.

From here on in the attacks come thick and fast as the DNA enhanced ‘Frankenfish’ start picking of the locals of the floating community. With some of these death being very inventive if what comical. But that’s what you are after in a film like this. In one case, the line “The house shot her in the head” is never going to be seen as anything but comedy gold.

As the body count rises and the floating house boats sink the shady characters turn up looking for their big fish, causing more harm than good. This then leads to a final showdown between Jeff, Sam and the final giant ‘Frankenfish. 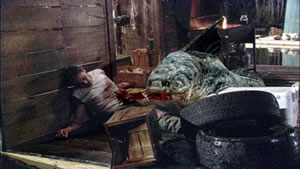 A predictable if not wonderfully entertaining film and for my part one of the best straight-to –dvd animal attack movies around and I’ve seen my fair few of them. First and foremost, its monsters giant mutant Chinese snakeheads are a lot more fun than they have any right to be. Created by a combination of CGI and puppetry, the beasts look sort of cheesy underwater, but are pretty realistic when they jump up on the dock to go after prey not to mention lively! Director Mark Dippé (Spawn) seems to take a definite delight in over-the-top shocks, and his background as an f/x man surely helped in creating these monsters.

Another refreshing side to this film is the casting. The largely unknown cast is made up of competent actors who give good performances of nicely rounded characters. Kittles down-to-earth portrayal makes Rivers a guy to like and root for. In addition, with no star factor to consider, it’s much harder to guess who the next victim will be.

Again a can’t stat how surprised and pleased i was in finding this little gem of a film, so ‘fish’ it and get ‘hocked’.﻿