Cigarette Burns Cinema has lined up the original stalk and kill classic to cheer you up from your cold dreary December doldrums with a very rare London screening of the original Black Christmas.

A simple end of term Christmas party takes a dark sleazy turn when Olivia Hussey (of Brian Trenchard-Smith’s Turkey Shoot) receives a prank phone call threatening to kill her. One by one the girls are picked off, and no one if quite sure who the killer is. Starring Margot Kidder as a wonderfully sarcastic drunk and genre hero John Saxon as the detective tasked with tracing the phone calls and finding the killer. Shying away from the bloodshed and gore and concentrating on tension building, Director Bob Clark’s (Porky’s, A Christmas Story, Turk 182, The Karate Dog) seminal holiday horror film paved the way for modern slasher films and was an acknowledged influence on John Carpenter’s Halloween, which is in some ways a spiritual sequel. 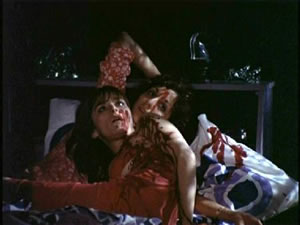 Flashback Record’s very own Graham Murphy will be spinning lovely vinyl goodies to set the mood before and after the screening and the bar will remain open throughout the film and after, a brilliant night is guaranteed. All for a measly £7.

Bringing you the finest in cinematic diversions every first Monday of the month at the lovely little back street boozer known as The Mucky Pup and now at the wonderful Rio Cinema in Dalston.