Here is the list of our best or worst b-movies for Christmas:

Martians, upset that their children have become obsessed with TV shows from Earth which extol the virtues of Santa Claus, start an expedition to Earth to kidnap the one and only Santa. Hay they should try living down here, that’s all we get at this time of year! So when they arrive on Mars, Santa, with the help of the two Earth children and a rather simple-minded Martian goon, overcomes the Martians by bringing fun, happiness and Christmas cheer to the children of Mars. 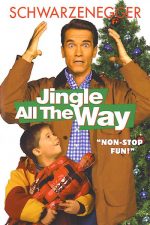 2. Jingle All the Way

Following on from Santa Claus Conquers the Martians message about the commercialism of Santa Claus on television and somewhat failing, let’s bring in the Terminator to see if he can but Christmas in its place with his message about commercialism and Christmas. Sadly not, one of the worst Christmas films in recent times Arnie must get his son the hottest, newest toy for Christmas, can’t the kid just put up with a ball on a stick? Anyway Arnie must travel all over town and compete with everybody else including a mail man named Myron to find this toy. The toy itself looks rubbish anyway and will be broken come New Year and the kid will only want the next new thing to come along, rant rant rant….

Everybody knows the rules, don’t get them wet, keep them out of direct sunlight and never, never feed them after midnight. But hay, rules are meant to be broken and in Kingston Falls mayhem ensues when the gremlins come to town on Christmas. The fun all starts when Billy Peltzer get a new pet for Christmas from his father, a Mogwai named Gizmo. Rule after rule are broken and the green little monster create havoc through the town and it’s down to Gimzo, Billy and his girlfriend to save the people of Kingston Falls.

A young boy watches his parents killed by a thief in a Santa suit, that’s always going to put you off the big jolly fella. So he spends his youth in an orphanage, staying quietly to his self, but his tormented further by an evil Mother Superior. He finally gets a job at a local store, where he finally snaps when he is required to wear a Santa suit, and goes on a killing spree that leads him slowly back to the orphanage, so a happy Christmas for everyone there then.