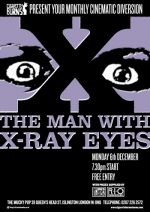 Before the month long drinking festival of Christmas descends upon us and clogs up all of our social schedules, grab a few friends and come join Cigarette Burns Cinema as they present to you one of Roger Corman’s classics – X aka Man with the X-Ray Eyes.

Released in 1964, an era rife with mad scientists experimenting with all sorts of mad potions and more often than not, using themselves as the Guinea Pigs. Foolish, I know, but then they wouldn’t be M…ad Scientists if they didn’t, now would they?

Our poor hero is played by none other than Ray Milland, whose truely staggering career ranges from Dial M for Murder to Frogs, beyond that, he sported a skull with a snake curled around it tattoo. Fuck yeah! Face it. Ray Milland rules.
I digress.

In this particular outing, Ray is working on an experimental eye treatment, as you would expect, the self experimentation goes wrong and poor Ray begins to see more and more of the world and beyond. With guest appearances by Don Rickles and a final appearance by character actor Morris Anrum this film is loads of fun.
Not to mention the truly crazy special effects, a sight to behold, indeed.

Of course they will start the evening with some short as yet undetermined, but fear not, it’ll be good.

Some lucky buggers will win our raffle and walk away with wondrous prizes from Flashback Records and tickets to the gorgeous art deco vault of cinema, the Rio Cinema in Dalston.

Get down early, seats are limited and we don’t intend to find more for you, so share those tables, kids!!!

Get So Roger Corman Classics