Our slacker of the piece is Anton Tobias (Devon Sawa – Final Destination and The Guilty), the laziest kid in the world, where a day of exertion for him is managing to get down from his bedroom in the loft, to the TV and managing to score some weed from his like-minded chums. Constantly dressed in his dressing gown and looking like a teenage version of the dude. Tobias is the essence of laziness and due to this it will become his undoing, or will it?

Along with his buddies Mick (Seth Green – Family Guy and Buffy the Vampire Slayer) and Pnub (Elden Henson – The Butterfly Effect and Lords of Dogtown), who also have about the same level of enthusiasm for doing anything other than getting stoned, though do still feel the need to attend class on occasions, are stocked by the news of a serial killer they seen on the news; anything to break the boredom. 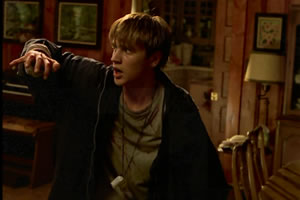 It seems that these killings are due to Satan’s hand making its way across the country and as the saying goes, “the devil makes work for idle hands “ it has been going from one lay-about to the next, possessing them to carry out its dreadful deeds. So before you can roll a fat one Anton’s hand has become possessed in an Ash style Evil Dead 2 homage and doing things that it would never normally do. For example offing his parents, though it seems Anton was so stoned at the time he was unaware of this. As well as killing Mick and Pnub, Mick with a bottle through the head and Pnub having his head taken off with a circular saw blade in a Frisbee stylee. 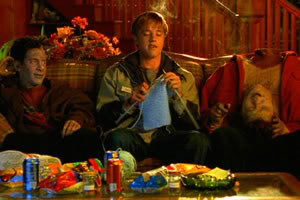 So freaked by what is going on, Anton tries to control his hand and heads over to his neighbour and resident hottie, molly (Jessica Alba – Sin City and Machete)  and by some stroke of luck manages to get some, god knows how. However, afterwards Anton heads back to bury his dead chums, who somehow don’t want to be six feet under. Deciding it was too far to walk to the ‘bright light’ at the end of the tunnel, the pair decide to stay and become the un-dead, as you do.

The only way Anton can stop this from getting any further out of hand, get it out of hand. He decides to chop off the possessed appendage himself. However, this does stop the possessed hand, but just sets it free to do its own bidding. 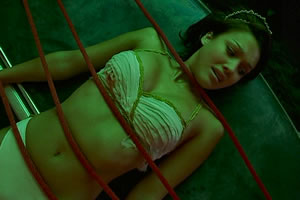 During all this though,  there has been someone try to track down this possessed hand of Satan across the country, Debi LeCure (Vivica A. Fox – Kill Bill: Vol. 1 and Independence Day ), a kind of Buffy type slayer character who knows what this hand is really after, a sacrifice to take back to hell; and by a stroke of luck the sacrifice that it has chosen to take to hell is that of Molly.

So will Satan’s hand get its victim, will Anton, Mike and Pnub be able to stop the hand while still being able to keep a steady high, and what other off the wall antics will occur before it’s too late?

For a film that disappeared on its release, this a little gem that should be dug out. Yes, maybe it’s not the best horror comedy around but it is a true B-movie in every sense of the word, possessed body parts, un-dead mates and screaming teens, everything that you would need, plus it does have a fair dose of gore for good measure. You may find better films, but you’ll also find a lot worse out there. So chance your arm, or hand to that point, and give it a go.

Anton is watching Night of the Living Dead (1968) on TV in one scene and Mick and Pnub are watching Dawn of the Dead (1978) on TV in another.