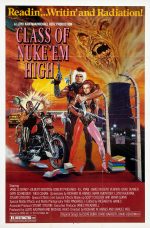 It’s the 80’s, it has teenagers and it’s set in a high school, all the ingredients you need for a traditional 80’s teen high school movie. But this is a Troma production, so don’t expect your normal run-of-the-mill fayre here, oh no. Add in some gore, gorse-out moments, sex, drugs, biker gangs and basement dwelling radioactive monsters and you’ll be on the right track.

Troma brings us one of its classic movies, and riding high (well high for Troma) on the success of The Toxic Avenger, comes the delights of Class of Nuke ‘Em High, where nuclear waste from the nearby power plant starts to affect the pupils of the local high school of Tromaville.

In the New Jersey town of Tromaville, the local nuclear power plant is having some problems and has sprung some leaks, which are seeping into the local water supply. Run by a controller who has now concern for the local populous and only cares for his job, just wants to keep this quiet without notifying the authorities. Or in other words, as he puts it “I don’t give a wet fart”. 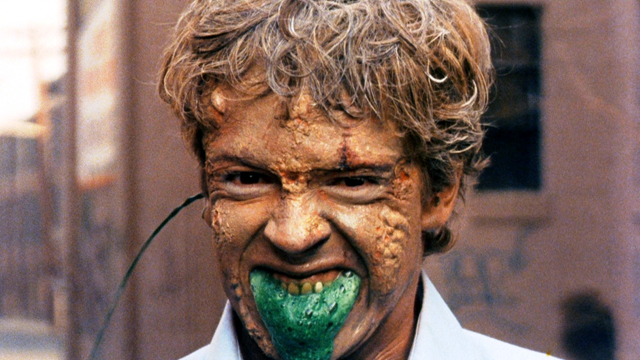 At the nearby high school, things only become apparent that something is wrong in Tromavilla when the nerdiest kid in school, Dewy, turns into a green-drawl slobbering loon, who attacks a kid in class then decides to dive out of the window. This isn’t the only strange occurrence within the school, it also seems that the school’s Honor Society, the preppies of the school, have turned into a crazed biker gang, selling drugs to the pupils and beating up old ladies for cash.

At the midst of all this craziness is Chrissy (Janelle Brady – Teen Wolf Too) and Warren (Gil Brenton – Lexx), your traditional high school sweethearts. Though that they have been dating for a while still haven’t done the deed. So when their friends find out, they decide to give them a helping hand by sorting out some weed for the honor society biker gang. However, this is no ordinary weed; it is ‘Atomic High’, which has been grown on the site of the nuclear power planet.

With this ‘Atomic High’ now greasing the wheels of Chrissy’s and Warren’s relationship, the pair do their utmost to test out the spring of a nearby bed, while at some collage beach party thing, all very 80’s. With the toxins from the ‘Atomic High’ whizzing around their bodies, Chrissy is full-term within a day and throws up the new infant down one of the school toilets. But this is no ordinary baby; it’s some sort of green slug like creature with teeth, all very Troma. 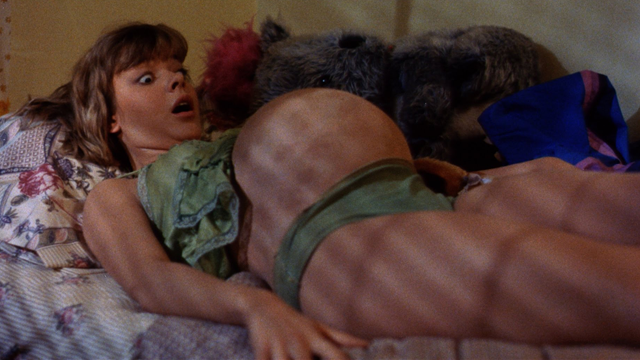 The weirdness continues with Warren turning into a green faced vigilante, though Warren is unaware of it; is out on the rampage dispatching a few members of the honor society biker gang, one with a punch through the head and out the other side and another with a fist rammed down his through, all very gory and very, very Troma again.

The craziness doesn’t stop there, as the biker gang gets expelled from school, they declare war upon it and start destroying the place, taking Chrissy hostage in the basement. Though also in this basement is Chrissy and Warren’s love child which has now mutated into a huge rampaging atomic monster.

So will Warren get his high school sweetheart back, will the biker gang get their comeuppance and will the local power plant pull it finger out and do anything about the leaks?

As my first time into the world of Troma I couldn’t have picked a better place to start. Class of Nuke ‘Em High is an outrageous fun filled gore fest with weirdness and craziness of the highest order, yet very accessible and immensely enjoyable to watch, I just can’t wait to come across more of Troma’s catalog of weirdness.