Re-released by those great people over at Argent Film, A Bullet For The General is one the first and maybe the most important of the pro-revolutionary spaghetti westerns or Zapata westerns of its time.

Directed by Damiano Damiani (Il giorno della civetta and Amityville II: The Possession) and scripted by Franco Solinas (The Battle of Algiers and A Professional Gun) and with its lead Gian Maria Volonté (A Fistful of Dollars and For a Few Dollars More), all who were prominent figures within the Italian political cinema of the 60s and 70s, this film is charged with political comment and pro-left agendas throughout, especially that of anti-American involvement within Central and Southern American affairs. 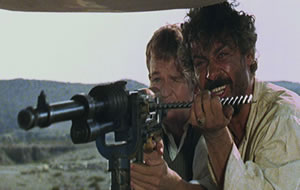 The film is set during the revolution years between 1914 and 1920 in Mexico. With bandit groups trying to rise up against the government army who are oppressing the peasant communities to stem the social uprising, Mexico is a dangerous place to be.

One such bandit group is led by the charismatic ‘El Chuncho’ (Gian Maria Volonté), who rides around the countryside with drums either side of his horse, calling people to arms with the aid of his brother, El Santo (Klaus Kinski – Aguirre, Wrath of God and Fitzcarraldo). A priest who feels god is on their side and that nothing can stop them in the revolution. Though played by Klaus Kinski the role is restrained, for Klaus Kinski, and adds to the diverse mix of characters within the film.

However, El Chuncho’s main occupation, as it were, it to steal guns and ammunition from the government army and to sell them on to General Elías (Jaime Fernández – Robinson Crusoe), the head of the peoples uprising, though Santo thinks his brother just gives them to the cause for free. 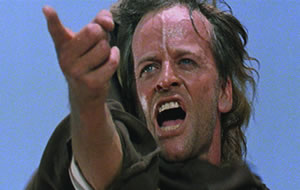 During one raid on a train loaded with soldiers and ammunition, along with everyday passengers a mysterious blonde gringo, Bill Tate (Lou Castel – Fists in the Pocket ), surprisingly assists the bandits by killing the driver and stopping the train. Manipulating El Chuncho from the start, Tate joins his gang and is named by Chuncho as Niño. Very eager to find out the destination of the stolen guns and ammunition, Niño aids Chuncho in a number of daring raids across Mexico for more. All the time pressing Chuncho for the final destination of munitions and the location of General Elías and manipulating Chuncho and other members of the gang when needed. But what are Niño’s reasons and what is driving him? 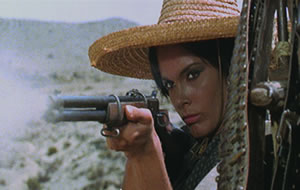 A Bullet For The General, being from the script of Franco Solinas, the writer of The Battle of Algiers, one of the most powerful political films of its time, is refreshingly leftist in its point of view and wears its “Yankee go home!” message proudly on its sleeve. Portraying Niño as a cold, money driven capitalist willing to manipulate anyone for his own ends, while Chuncho is charismatic yet poor idealistic Mexican doing what he can for his people and only swayed by his goal by the manipulation of Niño and the promise of money. A parallel that can be easily seen with that of the U.S. government’s involvement within Central and Southern American at the time of the film’s release (1966) and even today in other areas of the world.

For me this a film that should be taken notice of, not just for the great film that it is, but for the message that it has to say to the world, one that is even more important and relevant today. Oh get me with my Che Guevara t-shirt on.

Some parts of the soundtrack, composed by Luis Enríquez Bacalov, are featured in the videogame Red Dead Revolver