Now available for the first time on DVD, Shameless Screen Entertainment brings us this guilty pleasure that is Ratman, The critter from the shitter. A tale of science gone mad, topless models, beautiful locations and marauding midget monsters, were nobody is safe from the poisonous claws and teeth of Ratman.

For my first step into the world of Shameless, I thought Ratman, The critter from the shitter, would be the best place to start, because with a title and tagline as good as that, where else was I going to? And I have to say I was not disappointed.

The story starts with a genetic scientist crossing rats with monkeys, as you do, ending up with his greatest creation and his ticket to the Nobel prize, Ratman (Nelson de la Rosa – The Island of Dr. Moreau and Fuoco incrociato), which the scientist has named Mousey, how sweet. Meanwhile a photographer and his group of models are doing a shot on the island, where the scientist has been working. So now we have our monster, which has escaped, and our prey, just one piece left, our scooby-doo investigators.

These come in the form of an American writer, Fred Williams(David Warbeck – The Black Cat and Twins of Evil) and sister of one of the murder models, Terry(Janet Agren –Red Sonja and City of the Living Dead). Who do little more than annoy the local police and the car hire people.

Tension builds throughout the film with body counts rising and the constant scratchy screechy sound that Mousey makes has he gets ever closer to his prey. With this effect used to great effect in the final third of the film, where our Scooby-doo pair are held up in the scientist’s house as Mousey goes about his business. 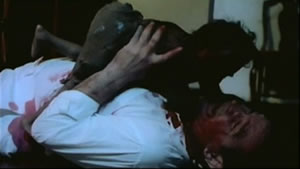 Nelson plays the role of Mousey with great zeal and adds a real sense of menace and creepiness to the role and along with the standard Italian horror requisites, gore, gore, boobs and more gore, Ratman really does have the equipment to be an effective horror movie. Though for me I have to say I couldn’t stop grinning throughout the whole film, as just the notion of a monkey-rat running around after topless models was just too funny for me to take seriously and therefore see the horror in the film.

Though for my first outing into the world of Shameless I couldn’t have asked for better, it has to be one of my most favourite of recent guilty pleasures that I have come across. One to dig out after the pub on a Saturday night I say, just remember to check the toilet before you go.