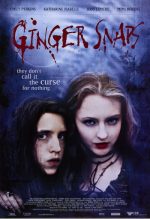 I’m just ridiculously happy to have seen “Ginger Snaps” when I was approximately pubescent because I’ve carried with me all these years, recommended it to lovers to werewolf lore and dark comedy alike, and hold it deep within my heart. Released in Canada in 2001, it’s the story of two sisters, Ginger (Katharine Isabelle, “Freddy Vs. Jason”) and Brigitte (Emily Perkins, “Stephen King’s It”), separated by one year of age but best friends to the end, goth-obsessed suburbanites who face every day with a scowl and the middle finger. For fun, they create fake death scenes – in a most creative and gorgeous opening credits sequence, we witness their best work – and show them in their high school class to watch everyone’s blood curl. Little do they know, deadliness is just around the corner… 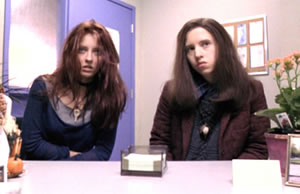 To put it simply, “Ginger Snaps” is the female-teenage-werewolf-menstrual-cycle movie: Ginger, the older sister, is bitten by a werewolf on the night of a full moon in October, coincidentally the evening on which she first gets her period. The girls keep the incident to themselves and attempt to carry on their lives at school and at home, but soon, Ginger’s transformations start a-rumbling. Ginger and Brigette handle the situation like professionals: they watch werewolf movies and take notes, they tape Ginger’s growing rapidly growing tail to her leg during gym class, and even consult the town’s weed dealer for some help in the wolfsbane department. It all leads up to – what else? – the big, drunken Halloween dance party in a warehouse. 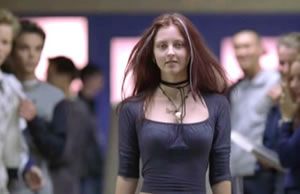 Sam, the dealer, one of my favorite horror characters of the past decade for his witty drug-oriented banter and brooding good looks, is played by Kris Lemche, a young Canadian actor who deserves much more than just a supporting role in “Final Destination 3” as his big breakout. Isabelle and Perkins do a brilliant job as G and B (as they so lovingly call each other); Isabelle excuses explicitly sexual werewolf vibes, while Perkins tackles the more difficult and emotional role of saving her sister. Both are skilled with the biting, dark comedic dialogue, and in the more heavily dramatic and horrific sequences. Mimi Rogers (“Austin Powers: International Man of Mystery”) is especially memorable as the inept housewife Pamela, the girls’ cheery and ignorant mother. 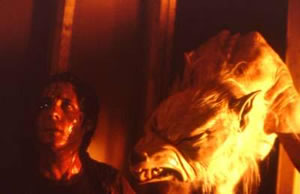 Written and directed by John Fawcett, who is undoubtedly a total genius, this movie has developed a most deserved cult following in the US on DVD. It’s tone, attitude, characters, and pacing are all so freshly unique, a superb mix of “An American Werewolf in London” and “Heathers.” It has even spawned two sequels – “Ginger Snaps 2: Unleashed” and “Ginger Snaps Back: The Beginning,” both released side by side (from two different directors) in early 2004; to put it simply, the second one is unsettling but disappointing, and the third one unnecessarily rewinds time and drops the two sisters into the 19th Century, where olden-timey werewolf pseudo-fun proceeds.

The opening shots of the girls fake suicides had to be shot on location at an actual home. Someone would have to distract the home owner’s four year old child whenever the actresses, who would be covered by fake gore, would have to come inside to change.

Ross Tipograph is a film buff and an Emerson College screenwriting major. When he’s not reviewing movies, he’s writing about Halloween costumes.