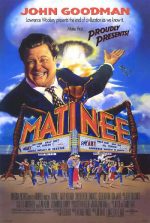 At the height of the Cuban missile crisis, where the phrase of the day at high-school was ‘duck and cover’ and air-raid drills for the impending doom were the norm. Being a new kid at school was never going to be the easiest of things to deal with. Though for Gene Loomis (Simon Fenton), being the son of Navy officer, moving from base to base and school to school was nothing new.

Gene, a fan of all things movie and science fiction, along with his brother see a trailer for the forth coming film ‘MANT!’ by producer and director Lawrence Woolsey (John Goodman – Arachnophobia and The Gatekeeper). A whirly showman, of the type who aspires to be the Barnum and Bailey of the movie world, mixed with a bit of Alfred Hitchcock, which, Woolsey copies to great extent with the use of a silhouette profile and a large cigar. 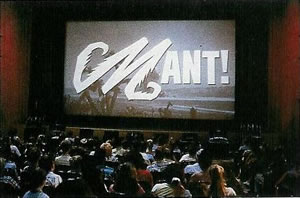 As hysteria starts to rise within the community, with the increased threat of nuclear war due to the missile crisis happening in their back yard; Woolsey sees it as an excellent opportunity to prompt his film MANT! in person and build on these fears.  Woolsey uses every trick going to whip up a frenzy within the locals about his new film, from using fake nurses in the cinema lobby to bogus protesters outside demanding the film to be band. All tools that were used by real-life promoters back in the day.

However, Gene all clued up on the goings on used by such promoters and by also recognizes one of the protesters (Dick Miller – Gremlins and Piranha) as an actor from one of Woolsey’s movies, manages to talk Woolsey into letting him help out on the gig. 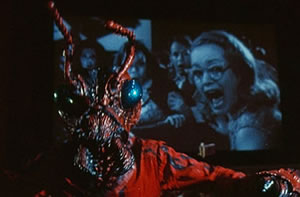 As the movie progresses two storylines develop, one of the build up to the screening of the movie and the other of the trials and tribulations of high-school kids trying to get a date for the upcoming screening. The first is excellently done with Gene now learning the tricks of the trade from Woolsey, played superbly by Goodman. However, the second is somewhat over simplified with little depth, though it does have warmth and high-lights some nice period touches.

As film moves towards its conclusion and the showing of the movie, the excitement of the screening is palpable, with the cinema filled to the rafters with over excited kids and disapproving adults. Woolsey turns true showman and unleashes his box of tricks on the audience as the film plays. From electric buzzers under their seats to a hired goon dressed up as the MANT running through the cinema. 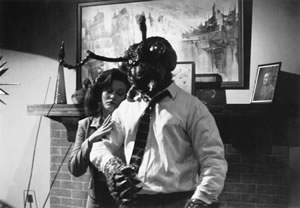 As the cinema goers get more and more whipped up by the film and Woolsey’s tricks, things start to take a turn for the worst as the cinema itself start to become unsafe. Does everything turn out fine audience; does Woolsey get his big deal and do our high-school kids get the girl?

For me this a great little lost treasure form Joe Dante, and very watchable for all ages, especially for those with a love of the great age of b-movies. Plus, MANT! is one of the best movies within a movie around and would have loved to have seen a full version, it’s pure b-movie gold.