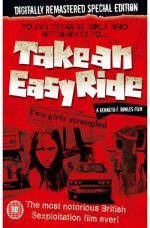 The first cockney rebel that is making the Dungeon its home is the 1976 film Take an Easy Ride starring Helen Bernat. As an educational piece about the dangers of hitchhiking, with hitchhikers being murder or lured into sex scandals or even being the attackers themselves, turns out to be more of a sex and violence shocker.

Following on from the dangers of hitchhiking British highways and byways, comes the warnings about the decadence of London, in the 1968 film Goodbye Gemini, starring Judy Geeson and Martin Potter. The pair are naïve blond twins that turn out to be just as dangerous as the world that they have fallen into.

The final inmate of Kim’s Dungeon this month and escapee is the Dungeon Breakout is the ITV collection of Armchair Cinema. A selection of top TV dramas including Rumour, The Sailor’s Return and pilot for the ground break series The Sweeney, Regan.

For the full Video Dungeon review get the September copy of Empire magazine.