A deranged and frightened man, screaming the odds that “They’re here, they’re here” is brought into a police station and is taken before doctors and other men in white coats at the local hospital, claiming unbelievable things that he has witnessed. The man is Dr. Miles Bennell (Kevin McCarthy – Piranha , Innerspace and Ghoulies III: Ghoulies Go to College) and recounts his story to the psychiatrists, how are in disbelief, as his story will terrify the world!!! 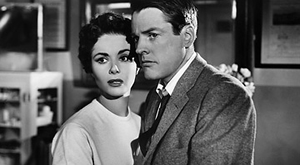 His story begins as he returns to his home town of Santa Mira, a typical small American town, white picket fences and all the trimmings, to continue is role as the town’s doctor after being away at a conference. Meet by his nurse, Sally Withers (Jean Willes – Hell on Devil’s Island), he his informed that many of his patients are keen to see him. However, on arrival back at his surgery, the waiting room is quiet with no patients. With all the patients so keen to see him, having cancelled their appointments claiming to be fine and that there was nothing wrong.

However, a few people have come to seem him, though not about their own ailments, but with worries about their friends or relatives; claiming that they are not themselves or even not their relatives at all. Miles however, just passes this off as a case of mild hallucinations that’s going around related some other factor. 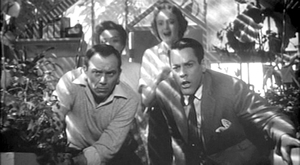 Being back in town,  Miles catches up with his old college sweetheart, Becky Driscoll (Dana Wynter – Sink the Bismarck! and Shake Hands with the Devil) and takes her to dinner. Though dinner is interrupted by an emergency call from a friend, Jack Belicec (King Donovan – The Beast from 20,000 Fathoms and The Defiant Ones).  Both Miles and Becky rush to his house and discover a strange body lying out on the table. Jack informs Miles he came down stairs to find this corpse just lying there, with a vague face that looks like it has not been finished. On checking the body Miles also find that the corpse has no fingerprints plus Jack’s wife Teddy (Carolyn Jones – House of Wax and Death Trap) notices that the body has a striking resemblance to her husband Jack. 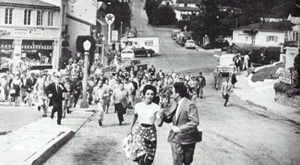 At the shock of this revelation Jack drops a class and cuts himself. Hours later Jack looks back over the corpse found in his house and see that it too now has the very same cut. As more and more things start to happen around the town of Santa Mira, Miles, Becky, Jack and Teddy realize that something is afoot and must escape the town. Paranoia and suspicion grows within the minds of the four until the true horror starts to be revealed to them, with discovery of a number of strange pods in the greenhouse of Jack and Teddy, and that they are being replaced by pod people.

Can the four of them escape in time to warn the rest of the world before it is too late and they too become replaced by the ‘Body Snatchers’.

Finally a brief history lesson, at the height of McCarthyism in the United States this film was seen as a covert indictment of the policies being run by the government at the time. The United States was in the grip of communist paranoia, where ordinary people would become suspicious about their own neighbors and McCathy’s policies along with Hoover fanned the flames of suspicion.

On the other hand, people saw the film in an opposite light and saw it as a message about the rise of communism, with the loss of personal identity and the rise singular thought.

However, the film makers and the actors of the film never proclaimed it to be anything more than a thriller, pure and simple.

Whatever you take away from this film, it cannot be underestimated how import this film has become. Evan today allegories can be made against today’s fear ridden society; maybe fear of one’s neighbors is deep with all of us and always has been.

Becky and Miles paraphrase Shakespeare twice. “I know a bank whereon the wild thyme blows, Where oxlips and the nodding violet grows” is from A Midsummer Night’s Dream. “That way madness lies” is from King Lear.