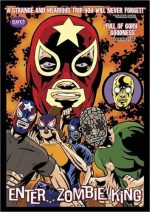 Driving through the night, our hero, Ulysses (Jules Delorme – Shepherd and Future Fear ), the peoples’ champion of wrestlers, is on his way home across the country, spouting philosophy in a classic cheesy voice over type of way as he goes, stops for gas, beer and jerky. Whilst in the gas station, he sees a poster for an upcoming wrestling event at a local bar. On the bill is Tiki (Rob ‘El Fuego’ Etcheverria – Curse of the Iron Mask), once a tag-team partner of Ulysses, but now a loner and doing cadge fights with flesh-eating zombies for quick cash. 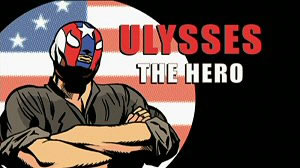 Continuing on his journey, Ulysses meets up with some old friends, Mercedes (Jennifer Thom) and Blue Saint (Raymond Carle), both masked wrestlers and chat about old times, especially about Blue’s departed father, The Saint.  It seemed that The Saint, like Ulysses was another fan favourite and had gained great respect from others. However, an unnamed wrestler took offence to this a killed him in the ring and now Blue Saint wants revenge on those responsible or any other neerdowell that might be around.

Ulysses, Mercedes and Blue Saint go to see the billed fight at the local bar staring Tiki. Tiki is another person that Blue has issues with for some reason or another. However, during the fight a spectator is killed in the car park out back by what seems to be one of Tiki’s zombies. With Blue jumping to conclusions points the finger squarely at Tiki, who drives off before anything can be done. 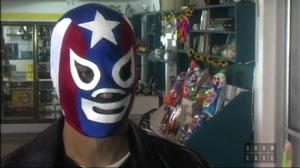 With the police now on the scene a zombie is apprehended and put in jail, as you do with zombies. Also this zombie seems to be one of Tiki’s wrestling team of flesh-eating zombies. With revenge on his mind for anything going, Blue Saint heads out to stop Tiki and bring him in.

However, Ulysses seems unconvinced that Tiki would do such a thing and calls up an old friend, Mister X (Sean K. Robb – Curse of the Iron Mask), another masked wrestler who works for a secret government organization.  Mister X arrives and conducts a test on the jailed zombie with what looks like a kid’s toy out of a cracker and declares that this zombie has been domesticated and could not hurt anybody, putting Tiki in the clear.

Ulysses and the rest of the wrestlers rush off to stop Blue Saint just in time. But the real question now is where are these zombies coming from? As means to find out they release Tiki’s zombie out into the woods, for some reason zombies have homing instinct, and follow him to an abandons theme park. 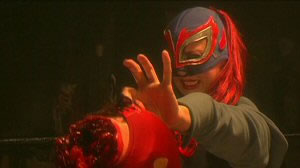 On arrival is seems they’ve got more than they bargained for, as Ulysses’ archenemy, ‘The Zombie King’, who’d have guest it?  is in the process of building zombie army along with a plan to turn everybody into zombies. Will Ulysses and his gang overcome the odds and bet the zombie hordes and defeat the Zombie King? Will Blue Saint have vengeance against those who killed his father? Will you see a wrestler or zombie in the same way ever again after seeing this film? All to find out in ‘Enter … Zombie King’.

A nice little film, that knows it can’t take itself too seriously and plays up the camp whenever possible and uses it’s comic book theme to great use when introducing the main characters. With a surf rock soundtrack and cheesy dialogue fun can be found easily here. Though one I think that would not be for your zombie purists out there. There is gore, but it is very fake but works well and there is very little terror, so one that is good to sit back and have a giggle with.

George A. Romero was originally cast as the “Zombie King”, but had to cancel due to scheduling difficulties

The trailer is in German, so get your phrase books out.