In 1998, Robert Rodriguez’s “The Faculty” was released, and a gift was given to cult audiences around the globe. This bundle of joy, this sci-fi action horror, about the lives of six high school students uncovering an alien conspiracy in their very own Ohio high school, was interestingly enough released in December amongst much more high profile Oscar bait, such as “Shakespeare in Love” and “The Thin Red Line.” It grossed a measly $40 million. The profit, though, is not why “The Faculty” is one of the most memorable high school horrors in memory. It is a present to lovers of B-movies everywhere, appealing to the fanboy in all of us.

But first, Robert Rodriguez? Whaaa? Was this film really directed by the man who up until this point had only dabbled in Mexican crime fare such as “El Mariachi” and “Desperado” (though the campy action horror “From Dusk Till Dawn” gave a glimpse of his clown side)? Robert Rodriguez attached himself to “The Faculty” because he is a smart fucking guy. He found a brilliant, groundbreaking screenplay in the hands of Kevin Williamson – a man who just years earlier gave us not one but two unforgettable high school horrors: the revolutionary “Scream” and the enjoyably awful “I Know What You Did Last Summer” – and saw a masterpiece just waiting to be born. The script is equal parts “Invasion of the Body Snatchers” as it is “The Breakfast Club.” Robert Rodriguez, with his spicy Mexican flair, looked at this script and said, “Holy shit. I could make this really, really cool.” And so he did. 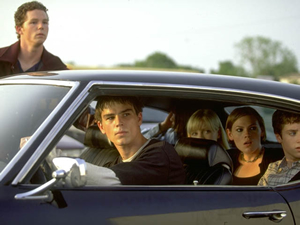 “The Faculty” centers around the cast of young teen up-and-comers by the names of Elijah Wood, Josh Hartnett, Jordana Brewster, Clea Du Vall, plus lesser-knowns Shawn Hatosy, who graduated to grittier fare such as “Alpha Dog” and “The Cooler,” and Laura Harris, a to-be castmember of Showtime’s genius “Dead Like Me.” The script’s characters perfectly fit the horrorclichés / guilty pleasure favorites: The Nerd (Wood), The Jock (Hatosy), The Druggie (Hartnett), The Princess (Brewster), The Outcast (Du Vall). “Breakfast Club,” indeed. Throw in the The New Girl (Harris), and you’ve got yourself an All-American gumbo stew!

The titular high school educators, however, also boast their own brilliant cast. To name a few: Jon Stewart, Bebe Neuwirth, Piper Laurie, Robert Patrick, Famke Janssen, and Rodriguez favorite Salma Hayek. Once the faculty starts to change, “The Faculty” begins, starting off with the mysterious transformation of Coach Willis (Patrick, in an ice cold performance), followed by Principal Drake (Neuwrith, sexy and powerful), and drama teacher Miss Olson (Laurie, channeling her terrifying Oscar-nominated role as Mrs. White in “Carrie”). From here on, it all rolls downhill – or for the audience, way, way up.

You know a movie is going to be totally fucking awesome when it skillfully and appropriately uses a freeze-frame introduction to the characters, complete with a modernized instrumental of Pink Floyd’s “Another Brick in the Wall” by alt-rock supergroup Class of ’99, a recording requested by Rodriguez to be created especially for the film. The vibe of this sequence sets the tone for the entire movie – it’s very operatic, like the opening sequences of “Magnolia” and “Boogie Nights,” where we learn so much info in such little time; we’re cramming it all into our brains and preparing for a fucking roller-coaster ride of a movie.

In “The Faculty,” all bets are truly off. Subjects rarely found in most other teen horrors are touched upon, such as Robinson Crusoe, domestic abuse, and self-awareness in the likes of Elijah Wood and Clea Du Vall sitting in the library casually discussing how movie-like this whole situation seems. They ask themselves what a character in a horror movie would do, and then they follow through. At another point, one character turns to another and says, “Isn’t this the part where somebody says let’s get the fuck out of here?” The response that follows: “Let’s get the fuck out of here.” If that’s not Shakespeare, then I don’t know what it is. 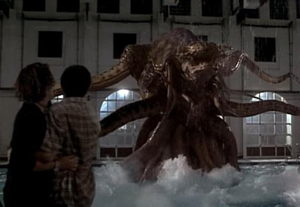 In the good-naturedness of avoiding spoilers, all viewers should know this: absolutely expect the unexpected. Characters that you’re supposed to trust and lean on for some emotional support, forget it: they’re just going to turn into an alien and rip your head off to the tune of an Alice Cooper or Marilyn Manson anthem booming on the soundtrack. Rodriguez and Williamson know how to fucking party; they use jump-cuts, rock songs, and quick transition to never let the pace slow down to breathe, nor do they treat any moment of musical score (composed by the praise-worthy Marco Beltrami, also from “Scream” and later Oscar-nominated for a great score to “3:10 to Yuma”) as cheap shot – every moment of jump-in-your-seat horror is honestly deserved. They respect the horror audience; in fact, they love them. This writer-director combo gives us everything we want and more. It’s beyond generous.

“The Faculty” is a ‘90s horror movie drenched in respectful in-jokes to its loving audience, with flawless performances from the dedicated actors, a fantastic Beltrami score and screaming soundtrack, spitfire dark comedy of pop culture and movie references not usually found in such mainstream genre fare, and to top it off, a heartfelt contribution from director Rodriguez who keeps the rocking energy alive and amped the whole way. It’s truly 104 of the most fun minutes of my life that I, an avid and loving moviegoer, may have ever experienced, and continue to revisit.

Check this movie out for a seriously great, B-Movie-tastic time.

The role of Delilah was originally written for Charisma Carpenter. She turned it down because she felt the role was too similar to her character Cordelia on “Buffy the Vampire Slayer” (1997). Councidently, Sarah Michelle Gellar who is another Buffy star, also turned down a role.

Ross Tipograph is film buff and Emerson College screenwriting major who writes about Halloween costumes over at StarCostumes.com.