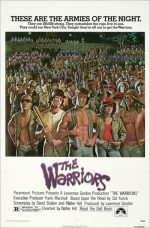 Listen up boppers, it’s the 1970s New York and the rise of gangs on the streets is rife. Walter Hill’s (Southern Comfort and Red Heat) 1979 film ‘The Warriors’ tapped into this fear of the streets and the general decay of society that was thought to exist at the time.

With gangs spread out across the whole of New York, each fighting for their own bit of turf against the next. A meeting is called in The Bronx by the gang ‘messiah’ Cyrus. Every gang in the New York area has to attend and send 9 unarmed members and a truce is declared amongst all the gangs. 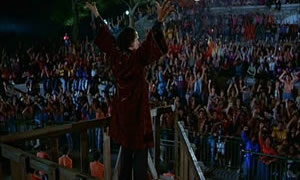 One of these gangs is ‘The Warriors’, a gang out of Coney Island led by war chief Cleon (Dorsey Wright) followed by 8 of his trusted men make their way to The Bronx, across the other side of New York for the meeting. Here Cyrus shares his vision of a unified army of gangs, which will take over the city streets. However, during his address he is shot and all hell breaks loose.

As all the gangs try to escape from the meeting as the police arrive Cleon goes to see Cyrus’s body and while doing so is fingered as the killer of Cyrus by Luther (David Patrick Kelly – 48 Hrs. and The Crow) a crazed leader of a rival gang, the Rogues, who was responsible for the shooting. As Cleon is ‘wasted’ by the members of Cyrus’s gang, the Riffs, the remaining Warriors make their escape. 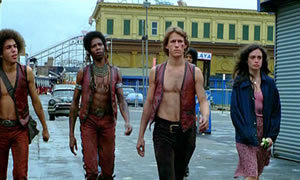 Now leaderless and stuck on the other side of town, the Warriors must now make their way back home to Coney Island with 100,000 gang members and 20,000 cops are after them. Swan (Michael Beck – Xanadu ) takes up the role as the new war chief with a brief bit of handbags from Ajax(James Remar – 48 Hrs. and Drugstore Cowboy ), who also thinks that he should be leader.

Now the fun begins and with the word is put out on the street by the D.J. (Lynne Thigpen), known as the ‘Voice’ and one of the best parts of the film, and the fight home is underway for the Warriors. 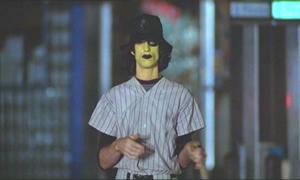 As the warriors make their way home, a colourful array of different gangs stand in their way, from the Orphans and the Turnbull AC’s to the Punks and the classic Baseball Furies. As the episodic nature of the film progress from one fight to the next, the gang is split-up, attacked and rejoined with some of their number lost along the way. But none of this gets dull and you always want to know which gang they will be facing next and who will be left standing. With their progress constantly being reported be the ’Voice’ the story keeps on moving and a fast pace leading to the final showdown between The Warriors, The Rogues and The Riffs.

A great film with some top action and some great fight scenes, one that I can say ‘I can dig it!’

The scene in the men’s room with the Punks was the only scene shot on set. The set was located at Astoria Studios, Long Island City – Queens.