In this 1974 film, The Mutations (The Freakmaker (uk)), our villain of the piece is the creepy Professor Nolter, played by Donald Pleasence (Halloween, Escape from New York and Django 2: Django Strikes Again) in all his creepiest best.

As a lecturer at a London university, he teaches his strange ideas of planet and human evolution to his bemused, but mostly bored students, telling them that in time it would be possible to cross humans with plants to gain the best from both to create a superhuman race.

At the same time a carnival has come to town, with its very own freak show, full of genuine ‘freaks’, from the Frog Boy and Pretzel Man to the Alligator Woman and the Bearded Lady. The freak show is run by Burns (Michael Dunn) & Lynch (Tom Baker – Doctor Who), both who have appeared in the show themselves at one point or another. However, Lynch, who despises his Carnival Family and his looks, is hiding a secret that Burns also knows about. 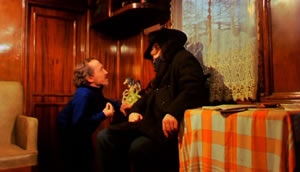 This secret is that Lynch has been working with the Professor in return for him curing his disfigurement so he can be rid of his carnival life. Lynch’s job for the professor is that of gaining human guinea pigs for the Professor’s experiments, the standard job of all henchmen of crazed scientists.

The first abduction that takes place and the only part of the film that holds any type of tension or creepiness, unfolds in a fog covered park. The victim is a student from one of the Professor’s classes, Hedi(Julie Ege). As she is pursued through the park by the members of the freak show, a real sense of tension builds, culminating in Hedi finally being captured by Lynch and taken to the professor.

Back at university, her friends while worried about her disappearance pass it off and continue with the lives and decide to visit the carnival. For me this is when the film starts to turn into a Scooby-Doo episode with the four students starting to get involved in the goings on of the Professor and the carnival.

The four, while at the carnival go and see the Freak show and witness what it has to offer. However, they are refused entry to their newest exhibit, the Lizard Lady of Tibet, when they notice a medallion being worn by Burns is the same as one belonging to Hedi. It seems that the professor has be passing off his failed experiments to the freak show. With suspicions aroused by the medallion, one of the gang heads back to the carnival after closing, to find out what is going on. 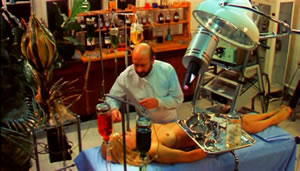 As the Scooby-Doo shenanigans continue the abductions increase and the first glimpse of the planet/human freaks appear. So does the Professor succeed in his diabolical plans, does Lynch get away from his carnival family and does the gang find out what’s going on before more of them are taken? You’ll have to dig this one up and find out for yourselves.

For me this film had its positives and minuses though more minuses. The one positive for me was how well the cast of the carnival were portrayed, giving them a sense of true family and a positive outlook.  However, the rest of the cast were found sadly wanting, to the point that I think Daphne, Velma, Fred and Shaggy would have been a better bet in their Mystery Wagon, and for Donald Pleasence, he was just sidelined as a cardboard villain. So if you’re into you gardening and prepared for a load of manure, check it out.

According to Robert D. Weinbach the role of Professor Nolter was intended for Vincent Price but this was abandoned after difficulties with Price’s agent.