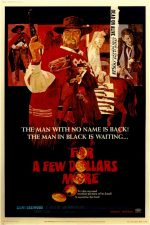 It is the time of the bounty killers, men that roam the wastelands of the Wild West, hunting down wanted men dead or alive for any reward offered. Two such men are on a course that will bring them together either has competitors or partners on the hunt for a single man, El Indio.

Our two men are Monco (Clint Eastwood – A Fistful of Dollars) and Col. Douglas Mortimer (Lee Van Cleef – Escape from New York ), both deadly in their work but different in their styles. The Colonel, a man trained in the army and who served during the civil war has knowledge and experience, while Monco has skill and talent. Where as Monco will face down his quary head on, as seen the excellent scene where he finds his man in the salon playing cards, the Colonel will hunt down and chase his victims and use his expertise to take them out.

Our villain of the piece, El Indio (Gian Maria Volonté– A Fistful of Dollars), a man on the edge willing to kill at the drop of a hat even at the expense of his own life, is planning to raid the largest bank in the area with the aid of his gang. However, with a bounty on his head, Monco and The Colonel are on the hunt for him, though little does El Indio know that he has a connection with one of these two men that goes back a very long way and that could have repercussions for all.

In a story that is far more complex than the first in the trilogy, Sergio Leone brings us a film with a lot more depth, not only in story telling but in its characters. These characters, unlike those in the first movie, have a real sense of motivation in what they are doing and are just not good guys and bad guys.

The story also has a much larger landscape to play on, with Leone showing that the Wild West is changing and not becoming so wild, with the introduction of the railroads and the use of the telegraph. I gained a sense of change was in the air in this movie, though one which is truly shown in Leone’s following films.

Leone is joined once again by Ennio Morricone, whose score again fits like a glove around ever part of this film, making you want to through on your poncho and ride out with Monco and The Colonel.

For me another classic of a film and one that is regarded highly amongst the western fraternity. Though for all its deeper story line and characters, I still rate A Fistful of Dollars over this for its simplicity and rawness.

Still a majestic film in its own right and one that adds to the folk law of spaghetti western and is always a joy to watch, but were will Sergio Leone take us next in his final film of the Dollars Trilogy ‘The Good The Bad and The Ugly’?

Gian Maria Volonté played two different roles in this movie and it’s prequel Per un pugno di dollari (1964) (A Fistful of Dollars). In the original, he played Ramon Rojo and in this movie he played El Indio.