The Mexican boarder town of San Miguel is a dangerous place to be for a stranger, where two rival gangs vie for control of the town, the Baxter’s and the Rojo’s.

The Baxter’s led by John Baxter (Wolfgang Lukschy), but more by his wife Consuelo (Margarita Lozano) run the gun running. While the Rojo’s, lead by the brothers Don Miguel (Antonio Prieto), Ramón (Gian Maria Volonté) and Esteban (Sieghardt Rupp) own the booze operation, have for now kept an uneasy peace between themselves. However, this is all about to change with the arrival of the ‘Man with No Name’ (Clint Eastwood) or Joe, as named by the Undertaker of the town. 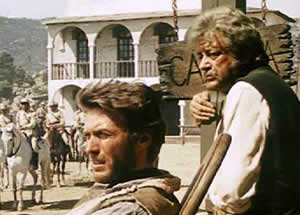 Eyeing that, there is money to be made in such a town as San Miguel. Joe stamps his intentions on the town with a classic face off with 4 of the Baxter’s goons, with the lines “Get three coffins ready.”…  “My mistake. Four coffins…” With this done, he lines himself up with work with the Rojos.

With the arrival of Government gold in the town and subsequent apprehension of it by the Rojos, Joe sees the ideal opportunity to make even more dollars, by working for both sides and double crossing them as he goes.  As the stacks build and the violence increase they can only be one outcome, revenge handed out by the barrel of a gun.

What can be said about ‘A Fistful of Dollars’ that hasn’t been said already? Though a remake itself of Akira Kurosawa’s film Yojimbo, Fistful of Dollars has left its mark on movie making, from the rebirth of the western in modern cinema, to its influence now seen in modern classics such as ‘Kill Bill’ and ‘Back to the Future’. 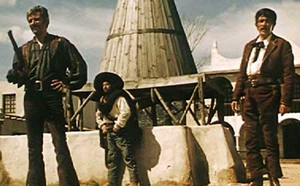 For me ‘A Fistful of Dollars’ is my favourite of the Dollars Trilogy, with the film set in just the one location of San Miguel, the Baxters at one end and the Rojos at the other with Joe in the middle at the saloon. You can nearly see the whole story play out in the single street that runs through the Town.

Giving the film this single ‘stage’ for its players to act out their roles, makes the story even more dramatic and even Shakespearean in its tone. Though a simple storyline in itself and with minimal dialogue, much of it removed by Eastwood for his character; the story has strong characters, all adding to the menace and danger that could be found Leone’s west. However, it’s not all danger and violence, comedy and lighter moments can be found throughout.  With characters such as Piripero (Joseph Egger) the Undertaker and Silvanito (José Calvo) the innkeeper giving that film warmth in what could be a very hard and unforgiving environment.

One thing that cannot be missed out when talking about ‘A Fistful of Dollars’ is the score. Ennio Morricone’s score for ‘A Fistful of Dollars’ was unlike any other western score before it and added to the menace that was Leone’s west and is now ingrained in the mind of many a movie fan. Though not as memorable as his other Dollars contributions, namely the theme for ‘The Good the Bad and the Ugly’, Morricone’s score is just as masterful.

So to say again, for me ‘A Fistful of Dollars’ is my favourite of the Dollars Trilogy if not my favourite western.

The Man With No Name is actually called Joe in the film’s dialog (by the undertaker) and in the closing credits.