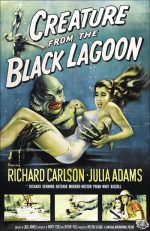 The story begins in the Amazon as a scientist, Carl Maia (Antonio Moreno ) searches for fossils along the Amazon River. Deep in the jungle he discovers what looks like the remains of a strange humanoid hand buried in the rock. With his find, Carl heads back to the university, leaving his craw at the dig by the river. But it seems that they are not alone, as something is stirring in the waters nearby as a strange webbed hand reaches out of the water, then disappears back in again.

At the university, with the help of Dr. David Reed (Richard Carlson – It Came from Outer Space) and Kay Lawrence (Julie Adams ), Carl persuades the University to fund a return exploration to discover the rest of the unknown creature’s remains. They are also joined by Dr. Edwin Thompson (Whit Bissell ) and Dr. Mark Williams (Richard Denning – Creature with the Atom Brain), who can see the financial possibilities of any such find. So with the expedition team assembled, they head back to the Amazon. 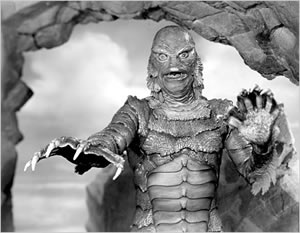 On arrival back at the dig, the expedition finds the campsite quiet and trashed, though on further investigation they find Carl’s craw dead. Killed by some unknown creature, which they think may have been a puma, though in fact attacked by the strange creature that was lurking in the waters nearby.

Captain Lucas (Nestor Paiva ), the local owner of the tramp steamer that is working with the expeditions is spooked by the attack and the fossil found by Carl and tells the party of a local legend, about a Black Lagoon, where they might find further remains. Buoyed by this new information the team head off to the mysterious Black Lagoon, unaware of what waits for them there.

Once at the lagoon, Reed and Williams don their scuba gear and start to search for rock samples deep in the lagoon, but discovery more than they were looking for when they witness a living specimen (The “Gillman”).  On discovery Williams wants to hunt down the creature and take it back as his prize. However, the Gillman has own ideas and wants the lovely Kay for himself. 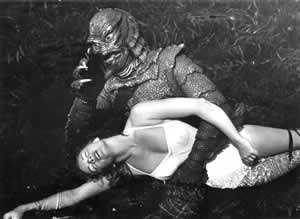 Will the Gillman get his new found love back to his lair or will the Doctor capture his quarry and return back to the university victorious? It’s for you to find out in this classic creature feature from Universal.

It’s a great little story of man finds beast, beast finds girl, man attacks beast and so on. There where many standout moments for me, especially the underwater camera work and also not forgetting, the Gillman himself. Now seen as the height of a man in a rubber-suit, The Gillman has become legend in the world of movie monsters and went onto appear in 2 more sequels, plus appear in many other TV shows. One being the The Munsters, in the episode titled “Love Comes to Mockingbird Heights”, where he was called Uncle Gilbert.

So for me, this is one of the rear creature features that I could watch over and over again on a rainy Sunday afternoon, great harmless entertainment with a top notch monster.

The film was originally produced in 3-D.