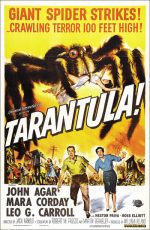 Tarantula! made in 1955, is the epitome 1950s ‘creature features’; it has everything you need from crazed scientists, radioactive isotopes, screaming leading ladies, small town America and one huge monster. Also it has enough tension and terror to frighten the paying customers of the local drive-ins on a Saturday night, well enough for back then in the 50s.

Our story starts when a strange and deformed figure is found in the desert in what looks like its pyjamas, though being in his pyjamas, was still wearing proper shoes, very odd to me, I suppose slippers just don’t cut it for going wondering in the desert.

The local Doctor, Dr. Matt Hastings (John Agar – The Mole People and Nightbreed) is called by the sheriff to view the body. On examining the body, Hastings is baffled by the cause of death. His distorted features suggest acromegaly, a rear condition that can take years to manifest itself. The victim turns out to be that of a research scientist who had been working with the local professor, Prof. Gerald Deemer (Leo G. Carroll – The Man from U.N.C.L.E. and Tower of London). The professor is called, but dismiss Hastings claims that is must be something more than acromegaly to have caused his partners death and returns back to his laboratory out in the desert.

Back at his laboratory we start to see what the professor has been working on. With the use of a growth serum and radioactive isotopes, always with the radioactive isotopes, the professor has been injecting a range of lab animals from rat and guinea pigs to monkeys and TARANTULAS! creating ever larger specimens.  All in the aid of averting world hunger due to the increase of human population, saying that by year 2000 the world population would be a huge 3.26 billion, boy was he way off. 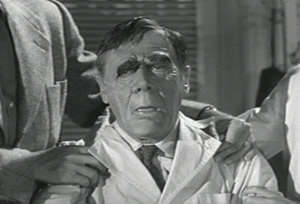 That night while working on his experiments Deemer is attacked by another one of his research scientists, how also has become deformed. It seemed while the professor was away one night the two researchers got bored and though it would be a good idea to inject each other with he growth serum, hmm smart scientists.

During the fight between Deemer and his now deformed researcher, the laboratory get destroyed causing the tarantula to escape and Deemer to end up unconscious. While unconscious, Deemer is injected with the growth serum by his attacker before he finals dies from his condition.

Unaware of what has taken place a new research assistant for the professor arrives in Desert Rock, Stephanie ‘Steve’ Clayton (Mara Corday – The Black Scorpion). After meeting Dr. Hastings she is taken up to the professors to start work on his growth serum.

With the spider now on the loose we start to see it moving over the desert landscape, growing in size and local cowboys start to reporting strange attacks of their cattle, by something that only leaves the bones and an odd puddle of white goo. The attacks increase and the spider starts to take human prey, with a local horse framer and two men in a pick-up are attacked and devoured.

Back at the laboratory Steve is starting to get concerned about the professor and the experiments that are being undertaken, causing her to call Hastings for help. As the professor falls ill from the injection he received during the attack, he explains all that he can to Steve and Hastings. 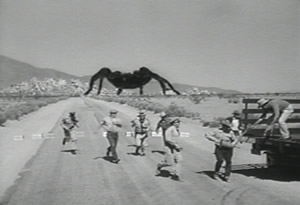 Putting the clues together that Hastings has gather during his visits to attack sites, from  what the  professor has said and visiting an expert in the field, he know now that the are dealing with a giant Tarantula. After calling the authorities to get everyone they can to help, Hastings rushes to the professor’s house only to witness the giant spider destroying it, with only Steve surviving the attack.

Now with the spider head straight for Desert Rock itself, who can stop it, what can stop, will the town survive, is all mankind doomed to yet another failed scientific experiment?

With a fun and exciting storyline and use of well placed footage of the beast, Tarantula is another worthwhile 1950s sci-fi to get evolved with, even if spider do give you the creeps.

The tarantula was an actual live spider. Air jets were used to make it move in the desired way over a miniature landscape.