Tony Rivers (Michael Landon, later to go on TV stardom in Bonanza as Joseph ‘Little Joe’ Cartwright, Little House on The Prairie and Highway To Heaven ), a troubled teenager from a single parent family raised by is understanding father is on a downward spiral. After being stopped by the police the nth time for fighting, this time with one of his own friends, he is asked by the policeman to think about seeking help for his anger issues and if so, he would smooth over any problems with principle of his school.

Angered by such thoughts as to go a see a shrink, he refuses. However, date night comes around and being Halloween, he and all his friends go off to a swinging party in empty house in the middle of the woods. Now this would be a great location to start the menace and horror that a film with such a title could bring, but is completely overlooked and I think a wasted opportunity.

Anyway the party gets swinging with harmless 50s dancing, bongo playing and the odd sing-song for good measure. Until the inevitable Halloween tricks are started. All are taken in good spirits by the party-goers, all until it’s Tony’s turn to be at the receiving end, when Tony loses it completely and starts beating up the poor prankster, to the shock of everybody there. Realising his actions he decides to seek help.

Tony goes to see Dr. Alfred Brandon (Whit Bissell – Creature from the Black Lagoon and Monster on the Campus) and his trusted assistant Hugo, all assistance are called Hugo or Igor or something like that, to seek help for his anger issues. On seeing Tony the doctor realises he has the perfect candidate to try out his own nefarious experiment, to release the inner beast within humans, because for some reason he thinks that humans are too violent and depraved as they are now, go figure.

Tony starts his treatment of hypnotherapy and injections, the doctors own recipe, and the therapy start to show results in Tony’s behaviour. Though now more withdrawn in himself, his temper has gone and fights are a thing of the past.

After another date night at their club-house in the woods, Tony Leaves early with his girlfriend and offers a lift home to another of the kids at the club-house. How decides instead to work home via a short cut through the woods, always a good idea.

So his friend sets off through the woods, whistling as he goes he starts to hear foots steps behind him get closer and closer. Spooked by the noises he tries to make a run for it through the woods, final falling and turning to see what is after him we see nothing of his pursuer, but only of the teenagers face as he screams in terror. 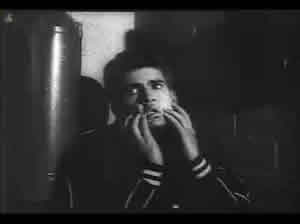 The following morning his body of the boy is found and the police are on the case. Meanwhile, Tony heads back to his doctor, concerned that something is wrong with him, but not sure what and with the events that had happened in the woods he thinks has something to do with it. Reassured by the evil Doctor, he is given more treatment.

Back at school, Tony is asked to see the principle who praises him on his improved behaviour and good record, and says he can go far. With a spring in his step he leaves her office and wonders past the gym, noticing Theresa (Dawn Richard), the girlfriend of his friend Jimmy (Tony Marshall), practicing her gymnastic routines.

While standing secretly in the corner, not trying to be noticed, a bell sounds right above him causing him to panic and we first see the transformation of Tony from a teenager into a werewolf. Nicely done on a limited budget the transformation is well handled and the make-up of the werewolf well done, apart for some dental issues.

Now transformed the beast is released and attacks its quarry. With screams ringing out through the school, soon people are on hand to witness the attack and the beast escape through the play-ground and over the fence.  In what seems like only mild shock, his school friends and the principle can easily identify Tony as the creature that attacked and killed Theresa. With this information the police set off with flaming torches in hand to hunt down the werewolf, which also doesn’t seem to worry them to much either. This teenage werewolf thing must have been a common occurrence back in the 50s, with such little made about it. 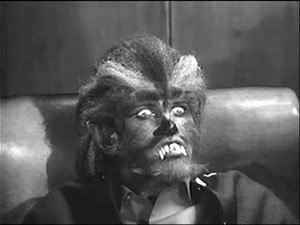 Managing to evade capture through the night, Tony wakes up as himself, but now aware of what he becomes heads over to the evil doctor. On hearing the news the doctor is ecstatic and gets Tony to take one more course of treatment so that he can film the transformation for his records. While under hypnosis Tony turns back into the werewolf, however a telephone rings bring him out of his peaceful state. On waking he attacks Hugo and kills him where he stands. Trying to escape the doctor heads into his laboratory hotly pursued by the werewolf, where the evil doctor gets his comeuppance at the hands of the beast that he had created.  Just moments later the police arrive only to see Hugo and the Doctor dead and the werewolf coming towards them.

Without hesitation they shoot and kill the werewolf only to see Tony reappear as he lay dead on the floor with the final quote from Detective Sgt. Donovan (Barney Phillips) “It’s not for man to interfere in the ways of God.”

With limited budget and great acting from the lead players, especially Michael Landon and Whit Bissell, this is great little piece of 50s kitsch. Also with good direction from first time director Gene Fowler Jr. the film has become a cult classic and launching a number of other ‘I was a teenage…’ films.

American International Pictures released this on a double bill with Invasion of the Saucer Men with the tag line “We DARE You to See The Most Amazing Pictures of Our Time!”