With the Western world griped by the fear of communism during the 1950s and with the dawn of a new scientific era, the world of science fiction was an ideal playground to exploit these fears within the populous. Fred F. Sears’ 1956 science fiction classic, Earth vs. the Flying Saucers, and with the help of Ray Harryhausen’s special effects, this  is a marvelous example of this paranoid time.

The movie builds the tension straight from the start, with a hefty voiceover declaring ‘as fact’ that there has been a raise in the sightings of UFOs, with official agencies being set-up to deal with these sightings by the general public. From there the movie moves to our main characters, Dr. Russell A. Marvin (Hugh Marlowe) and his new wife Carol Marvin (Joan Taylor).

While on route to a military base, where Dr. Marvin has been launching a number of new satellites to orbit the earth to aid in mans exploration of space. The couple witness what they believe to a be a flying saucer, but while this is happening, the Doctor has been recording his notes and manages to record the sound of the flying saucer by accident.

Once at the military base the couple is joined by her father, Brig. Gen. John Hanley (Morris Ankrum), who informs the Doctor that all the satellites that have been launched have been destroyed for some unknown reason.

While the couple are trying to figure out what has happen to their satellites and what they saw on the journey to the base, a flying saucer lands at the base. As usual the USA military open fire and all hell breaks loose, with the flying saucer taking off, but not before levelling the military base to the ground. With power failing at the base the Doctor discovers a hidden message within his recording of the flying saucer, which asked for meeting. 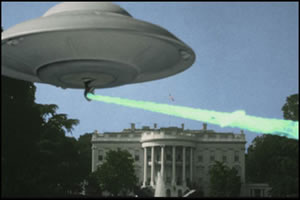 After being contacted again by the visitors the Doctor meets with them and is told that the earth has 56 days to bring the world leaders together, so that they can hand over the earth to them, without the need of a pointless war.

This deadline given by the alien invaders, which seems a bit generous of the evil overlords if you ask me, gives the doctor and his colleagues time to come up with a device to bring down the alien’s flying saucers and give earth a chance of survival. 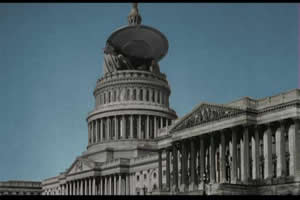 Now as the 56 days deadline has past, the invasion takes place and this is where the film springs into life and Ray Harryhausen’s special effects come to the fore. The iconic attack on Washington, which has been copied and parodied by many movies (ID4 and Mars Attacks!), is realized to great effect considering the effects of the time, with the major landmarks of the capital all being used, from the Capital Building to the classic collapse of the Washington Memorial.

As the invaders inflict panic and destruction upon the capital, their flying saucers are gradually being brought down by the doctor’s new weapon and victory is won as easily as that, so everyone off to the beach to celebrate.

An enjoyable film of its time, with some great iconic moments and a film that has had an impact on many since, so another one in the yes column for me.

This film originally played as the top half of a double bill with The Werewolf (1956), also directed by Fred F. Sears.